Because his room was dark and the door was closed, Robin Edwards assumed her then-11-year-old son went to bed before 11 p.m nightly. Then one stormy night, when her husband went into his room to check the windows, the boy’s secret was out: Instead of sleeping, he was playing on his laptop into the wee hours of the morning. He had smushed a pillow against the bottom of the door to block the light.

This explained a lot. “We usually had to pull him out of bed in the morning,” says Edwards. Besides fatigue, kids who don’t get enough sleep—studies show children 10 to 13 need nine to 10 hours a night, but get less than eight—can suffer from poor grades and memory loss, says Indra Narang, a respirologist and director of Paediatric Sleep Medicine at Toronto’s Hospital for Sick Children. Chronically sleep-deprived kids, she adds, can act a lot like those with attention deficit hyperactivity disorder (ADHD): irritable, aggressive and distractible.

Reading beneath the covers with a flashlight, of course, has become passé; this tech-obsessed generation is now plugged into smartphones, laptops and tablets, spending hours texting and gaming. Almost a quarter of grade four students have their own phone, reports a recent survey by online media literacy organization MediaSmarts. Twenty percent of those kids, it found, sleep with their cells. With notifications going off at all hours, it’s no wonder kids aren’t getting the rest they need.

“Social media and screen time are encroaching on sleep,” says Narang. Kids who use devices right before bed stay up later and lose out on sleep compared to those who don’t, says a study in the Journal of Pediatrics. Researchers found phones, tablets and computers emit an energy-efficient LED light—a bright glow rich in blue wavelengths, which suppresses the release of melatonin (the hormone that signals to the brain that the body is sleepy). Meanwhile, extra stimulation from movies or video games impairs sleep onset, quality and duration.

Beyond the physical effects of screen time, the desire to stay connected is also keeping kids awake. “There is always someone to talk to in the middle of the night thanks to technology,” says Narang. Pressure to be plugged in exists around the clock, as does the corresponding anxiety of full-time availability, so Narang suggests avoiding temptation by removing all devices from kids’ bedrooms. She recommends all screens be turned off at least 60 minutes before bedtime.

This may be easier said than done. During puberty, tweens’ internal clocks are shifting and sleep-inducing melatonin is released later in the night, explains Calgary-based respirologist and sleep specialist Kristin Fraser. She stresses that parents have to be vigilant to keep bedtime routines screen free and relaxing. Start early, like Heather Greenwood Davis did with her nine- and 12-year-olds, and moderating tech time will be less a punishment and more a way of life. “My boys have been on a tech diet for years,” she says of her family’s rules: Monday through Friday, no TV or video games allowed unless they’re being enjoyed as a family. Neither boy has a smartphone yet, but iPods are used on an honour system. “They’re so used to it now that they don’t realize how restrictive it is.”

Another way to do this is a centralized charging station in the kitchen or family room where everyone—including parents, who should be modelling healthy habits—can plug in their personal devices and unplug their brains before bed. This keeps the temptation to connect far from fingertips, and lets everyone get a good night’s sleep. 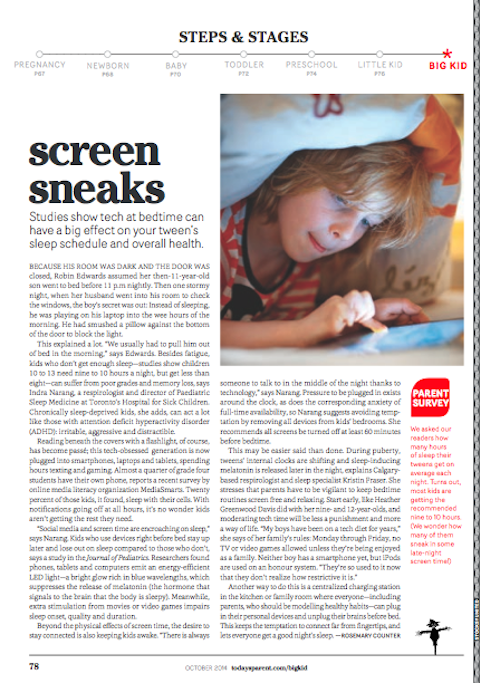