What’s new at Toronto’s Everything To Do With Sex Show?

What’s new in sex? Probably nothing, ever. What’s new at the Everything to Do With Sex Show, Friday to Sunday at the Metro Toronto Convention Centre? Lots of things, thanks for asking!

For those not in Toronto – or those too shy for sex shows – we asked show manager Mikey Singer for all the dirty details. (And for Halifax, Quebec City, Montreal and Niagara, a sneak peek about what to expect at your own upcoming sex shows!)

“Ten years ago, when I started doing this, the Rabbit was the biggest toy,” says Singer. Ladies remember this gadget from the beeper age fondly I’m sure, but times – and toys – have changed. “New products are medical-grade silicone, solar powered and – like the show – geared towards couples,” says Singer.

Sexologist Jessica O’Reilly (a.k.a. Dr. Jess) will be focusing on the former. “I highly recommend couples go,” she says, “because as much as it’s sexy and titillating, it’s also highly educational, helps to broaden perspectives and sparks new conversation.”

O’Reilly, host of Playboy TV’s hit show SWING and first-time speaker at the show, will be teaching a sex workshop on subject matter too sexy for print media. (Also, my mom reads this.)

Other new trends this year include fitness, art and – of course – Shades of Grey.

Start with a class in (sexy) yoga. Gravitate Studios will be showing spectators techniques to aid physically and mentally. “If you find yourself thinking about work while you’re undressing your lover, this class will help.”

Performance artist Jessica Gorlicky, fresh off of Nuit Blanche and a pile of solo exhibitions, is putting on four shows. “Each performance will be different,” says Gorlicky, who’ll be painting nudes in varying styles to “put them together into a sexy and sensual art piece.”

Brave showgoers might then try the dungeon – which isn’t as scary as it sounds. “Because of the popularity of 50 Shades, we’ve added a little themed demo area where we’ll be acting out stuff in the book,” says Singer.

If you’re a sex show virgin, or if words like “dungeon” have your palms feeling sweaty, some expert advice: “Feeling nervous is normal – any time we take sex out of the bedroom, people tend to get nervous,” says O’Reilly.

Take the sex show only as far as you want, she adds. “Most of us go just to observe, so you’re in good company and no one will push you beyond your limits.”

And for those at home, one more new development: the Social Media lounge, a new area featuring a roster of Sex Show social media ambassadors, will be keeping the rest of us updated – all from the comfort of your own bedroom. 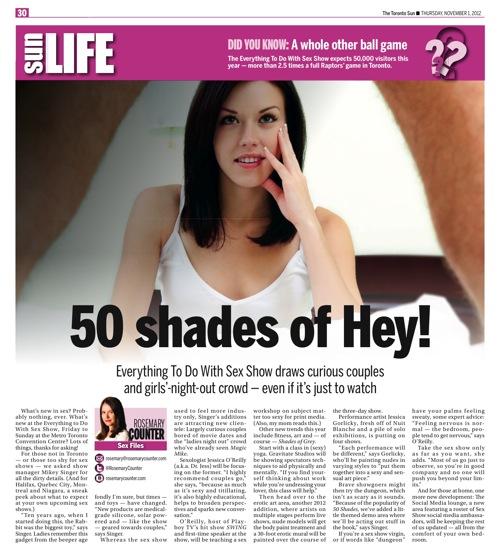