Is it time to stop giving introverts the silent treatment?

“Did you go out today?” asks my boyfriend after a long day at the office. It suddenly occurs to me that I am still in my pyjamas, working on my laptop and curled up in the same spot as when he left. He’s just curious, he says, but I hear only criticism.

He gives me a list of valid reasons—exercise, the weather, human interaction—but I’m not convinced by any of them. I suspect he thinks I must be bored, or boring, or clinically depressed. For the record, I’m not. Nor do I have seasonal affective disorder or agoraphobia. I’m not allergic to the sun and I’m not “just shy.” I happen to be an introvert—and there’s nothing wrong with that.

Carl Jung coined the terms “introvert” and “extrovert” in 1913, just as Western society was moving from what could be called a culture of moral character (“Are you a jerk?”) to a culture of personality (“But are you a fun jerk?”)—one that values charisma and magnetism above all else. Bold and outgoing, the extrovert’s experience was normalized as the introvert’s was made to seem pathetic. They’re happy, outgoing and confident; we’re guarded, private loners. And with 75 percent of the population on team extrovert, they dominate pop culture and political arenas; we introverts like to stay home and read books.

“People often think of introversion as synonymous with being anti-social or asocial,” says Susan Cain, proud introvert and author of Quiet: The Power of Introverts in a World That Can’t Stop Talking. That is truly incorrect—and I’m living proof. For the record, I have friends, I like to party when the mood’s right and I can rock an extrovert costume like nobody’s business. Two hours later, however, and unlike a genuine extrovert, I’ll be ready for a nap. “Think of yourself as a battery,” says Cain. “Extroverts are charged up by being in groups, while introverts feel depleted.”

Don’t feel guilty if you’re a dead Duracell—according to some psychologists, where you fall on the introvert/ extrovert scale is coded in your DNA. One study—23 years old and counting—looked at “high-reactive” (fussy) and “low-reactive” (chill) babies. Due to elevated sensitivities, the former grew into introspective introverts while the latter tended to become the relaxed and confident type. “It all relates to how you respond to stimulation, including social stimulation,” explains Cain.

In a Twitter-happy society that is loud and fast moving, introverts often appear—though I hate to admit it—quiet and slow. This is just one of many misconceptions, says Victoria-based personality-type expert Donna Dunning. Contrary to the “shy, withdrawn, slow” rap they get, introverts can chit-chat with the best of them. “Get an introvert with someone they’re comfortable with and talking about something they’re passionate about and they can talk your ear off,” she says.

But we usually don’t, and it’s possible that the silent treatment seems downright rude to others. “An introvert might walk by someone in the hall or on the sidewalk and not even notice them,” says Dunning. “And because thinking eyes roll all over the place, lack of eye contact can also be misconstrued.”

If it seems like I’m just confirming the awesomeness of extroverts, consider this: Studies also suggest that extroverts appear to have more active dopamine pathways. Dopamine is the sexy, feel-good chemical, so an anticipated reward makes extroverts more likely to take risks and ignore warning signals. As a result, they’re more likely to be in a car accident, have an extramarital affair or blow their savings on a bad investment. Having famously avoided the bull markets that ruined his colleagues, Warren Buffett and his circumspect strategy became last year’s book Warren Buffett Invests Like a Girl—which may as well have been titled Warren Buffett Invests Like an Introvert.

It’s tempting to place the extrovert/introvert characteristics atop old-fashioned gender stereotypes—men bold and dominant; women shy and demure—but my double chromosomes have little to do with my introversion. “It’s pretty much 50/50, and, if anything, men are slightly more likely to be introverts than women,” says Cain. This runs contrary to common thought, since shyness—introversion’s laziest connotation—is a more acceptable female quality. “Shyness is about fear of social judgment; introversion is a preference for less stimulation,” she explains.

So, shall I just stay in and skip it then? Should I give in to my introversion? Not exactly, says Cain. “I don’t think you can ever change who you are fundamentally, but you can certainly shift what your social skills are like. With time, you can learn to enjoy situations you might have once dreaded.”

If it’s a struggle to find a compromise between an awkward cocktail party and crawling back into bed, Cain suggests that you follow your gut: “You’ll feel when you start craving company or, conversely, when you’d rather have a lunch date with yourself. It’s about thinking of your alone time as being just as important and valuable as social dates.”

And so today, and maybe tomorrow too, I’m going to pick pyjamas—and I’m not going to feel guilty about it either. If this sounds like loser central to you, or if you’re getting antsy just thinking about it, consider spending some time on the other side. Sit still and enjoy your own company. Turn off your iPod and resist the urge to refresh your Facebook page. And if you simply can’t, don’t be too hard on yourself. You’re probably just an extrovert—not that there’s anything wrong with that.

MOSTLY TRUE? YOU’RE AN INTROVERT!
1. I’d rather split a bottle of wine with one good girlfriend than share a keg with six.
2. Alone time feels awesome, and I want more of it.
3. I “let it go to voice mail” a whole lot more than I’ll admit.
4. I’d rather write a stern email than have to confront someone in person.
5. I often wish I’d spoken up—but I rarely put my foot in my mouth.

Famous Introverts
•We don’t get as much attention as extroverts, but this team ain’t so bad. All the best writers are (or were) introverts (I tell myself), especially Jane Austen. “There is nothing like staying at home for real comfort,” she once said.
•Eleanor Roosevelt, the first First Lady to hold a press conference or appear on talk radio, was terrified of public speaking and loathed social events.
•Greta Garbo refused to sign autographs, answer fan mail or give interviews. Girlfriend couldn’t have been more clear: “I want to be alone,” she famously purred.
•After sweeping the 2012 Grammys, Adele, the world’s current biggest songstress, declared that she’s taking time away from music for marriage, kids and a vegetable patch in the country. 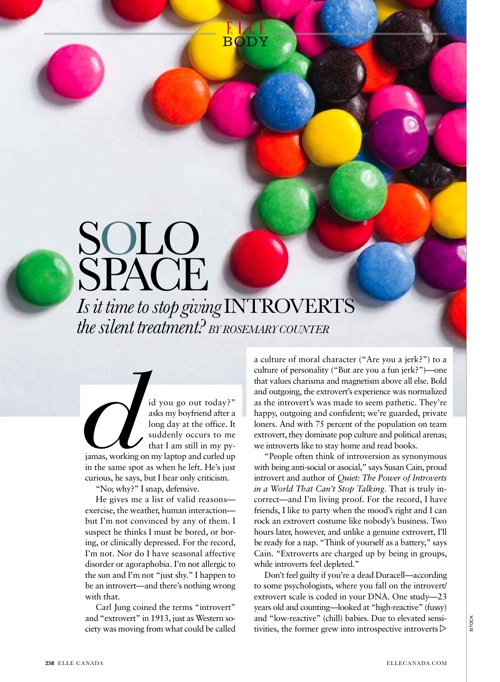 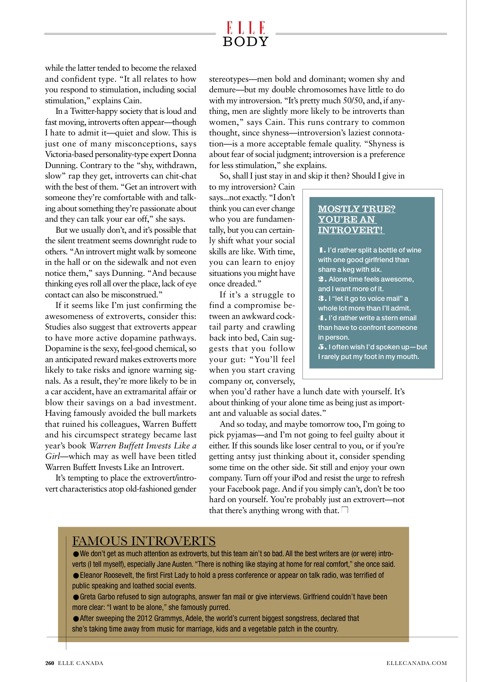