How closely are you following your favourite celebs?

Get out your party dresses, ladies; it’s Oscar season again. And as such, celebrity chatter—almost none of it about the films, mind you—will no doubt be great: Did you see Halle’s dress? Is Anne Hathaway too skinny now? Will Nicole Kidman’s face ever move freely again?

It’s nasty, yes, but it’s also natural—we’re social creatures with old habits. Before Perez Hilton put gossip at our fingertips, fans lined up for a glimpse of Madame Tussaud’s wax celebrities in 1835 and, before that, the ancient Greeks looked to their gods for gossip and drama. They even had a proverb to describe the plight of fame: “Whom the gods wish to destroy, they first make famous.”

The relationship between famous people and fans is closer—and more fickle—than ever before. “We used to admire people who were admirable,” says cultural anthropologist Grant McCracken, a Vancouver native and author of Culturematic. He’s referring to Old Hollywood, when talent and goodness—think Audrey Hepburn and Cary Grant—reigned supreme. If Marilyn Monroe or Elizabeth Taylor had problems (uh, they did), fans didn’t always know the dirty details.

Now, Hollywood is in an age when paparazzi meet technology. “We know so much more about [stars] now; it’s a warts-and-all scenario that we watch through good and bad days,” says McCracken. This, fittingly, is both good and bad. “An awful lot of stars today are flawed humans with minimal talent. But we can identify with that.”

As the gap between celebrities and regular people closes, they depend on us for fame while we depend on them for identity. In this case, a little bit of celebrity can be good for you: A 2008 study by researchers at the University of Buffalo found that people with low self-esteem saw their favourite stars as versions of their ideal selves, which made them feel better about their real selves. This is how I feel about Tina Fey—she’s smart and funny and wears glasses, and I wanna be just like her.

But what happens when our fave celebs behave badly? If Fey were to get arrested for selling crack to orphans, would my identity suffer?

A case study: Last year, Kristen Stewart had a really, really bad day. Busted canoodling in a car with her married director, with photographic evidence to boot, Stewart admitted the affair via a very public statement. “I’m deeply sorry for the hurt and embarrassment I’ve caused to those close to me and everyone this has affected,” she said. “I love him, I love him, I’m so sorry.”

Stewart’s apology was to her boyfriend, Robert Pattinson, of course, but “everyone this has affected” is a deliberately broad group. Andrea Iseman, a 29-year-old blogger in Toronto, is a huge Twilight fan who has seen every film on opening day. “When I read about K-Stew cheating, I was shocked,” she says. Iseman’s new favourite celeb is Taylor Swift.

Iseman has a three-or-four-times-a-day gossip-site habit, not including her own site, celebspiration.com. According to New York psychologist James Houran, co-developer of the Celebrity Worship Scale (CWS), she’s very normal. The CWS isn’t a diagnostic tool, as there’s no official celebrity-obsession syndrome (yet), but it does use a series of yes/no statements—from “The successes of my favourite celebrities are my successes also” to “When my favourite celebrity dies, I will feel like dying too”—to plop everyone into a three-stage scale.

Stage one is called Entertainment/Social, and most of us are already here. “If you have a pulse, are connected with the outside world and live in Western society, you’re going to indulge in a little celeb gossip,” says Houran. In stage two, Intense/Personal, things get closer to home. “People start meshing their identity with that of their favourite celebrity.” Houran estimates that a quarter of the general population is at this level.

Finally, there’s the Borderline/Pathological stage, where 10 percent of people fall. “Here, things can get very dysfunctional. For example, you may spend money you don’t have on celebrity memorabilia, withdraw from friends and family and spend a lot of time and energy trying to meet the celebrity,” says Houran. The news is rife with more stage-three fans than ever before: Alec Baldwin’s stalker, convinced she was his girlfriend, smiled at reporters while being arrested; Jennifer Aniston’s carried a list of potential baby names.

Thankfully, I’m not anywhere close to camping out in anyone’s bushes—especially when TMZ will do it for me—but I’ll admit that I’m firmly in the Intense/Personal category. And I understand completely when Houran calls his scale “a slippery slope.” I still have a secret stash of expensive Princess Diana memorabilia. When Whitney Houston died, I found myself moping to “I Will Always Love You” on repeat. Ditto for Amy Winehouse, Heath Ledger and even Andy Griffith. When he died, a three-day thundercloud engulfed me. As if Matlock were a wise old uncle, I mourned and recovered in the conventional way.

“I remember the day Michael Jackson died,” recalls Shane “Fame” Alexander, a 34-year-old writer and “huge pop-culture freak” from Newmarket, Ont. “I felt like a friend had passed. I don’t remember a time when Michael wasn’t part of my life. Dude taught me to dance.”

Of course, dude did not teach Alexander to dance—they’d never even met—but there’s a term for what he’s describing. “Parasocial interaction is generally a one-sided relationship between the fan and the celebrity,” explains Houran. “We form an attachment, which leads to a relationship—at least in our heads.” The term first popped up in the 1950s with the rise of television, but it was modern social media that sealed the deal.

“We looked at preoccupation with the Internet to see if it correlates with celebrity worship, and, of course, it does,” says Houran. Canadians spend more than 43 hours a month on the Web—the most of any country and almost twice the worldwide average of 23 hours. We’re also the most prolific users of Facebook, YouTube and—the uppity celeb’s platform du jour—Twitter.

It’s a tempting premise: Just one click and you can follow your fave celeb’s every thought, which he or she is gifting you for nothing at all. Avid tweeters let us in on the minutiae of their daily lives—“cereal is really good,” noted Justin Bieber to 30 million followers—which arrive in tidbits that we weave into our own daily lives. Bieber’s relationship with fans, he told Oprah, is completely different from that of any star that came before him. “I’m able to really connect with them through the Internet,” he said. “I try to respond to as many as I can.”

By interacting, celebs like Bieber encourage parasocial relationships—but not always for the right reasons. “Remember: When a celebrity sends out news or tweets, they’re not doing it for you. They’re doing it to capture and keep a market,” says Houran. Fame is more valued and sought after than ever before, but it’s also more fleeting. “Modern celebrities aren’t timeless. They’re of this time—they’re somehow attached to right now,” says McCracken. “But they’re also totally replaceable, and the moment we’re sick of them is the same moment they disappear.”

If you’re too involved, you might feel like you want to disappear too. And, like with any other addiction, the threshold is when wants become needs. If this is you, go cold turkey on Us Weekly, find a new hobby and work on knowing yourself instead. Remember that celebs are in the business of being known, but, paradoxically, we in no way really “know” them—despite what reality TV and social media want you to believe. 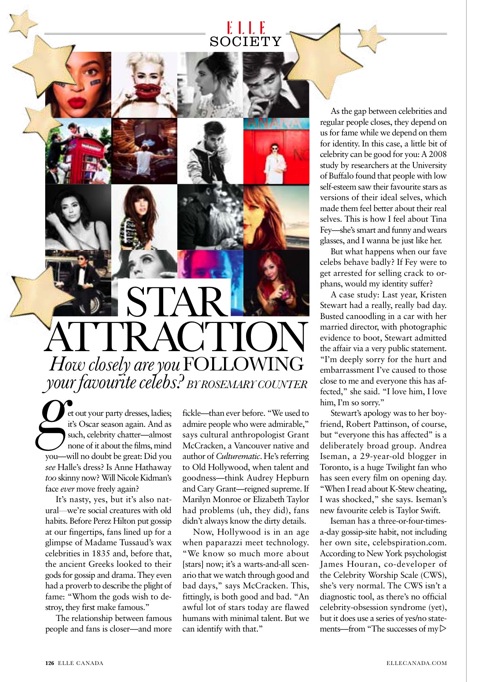 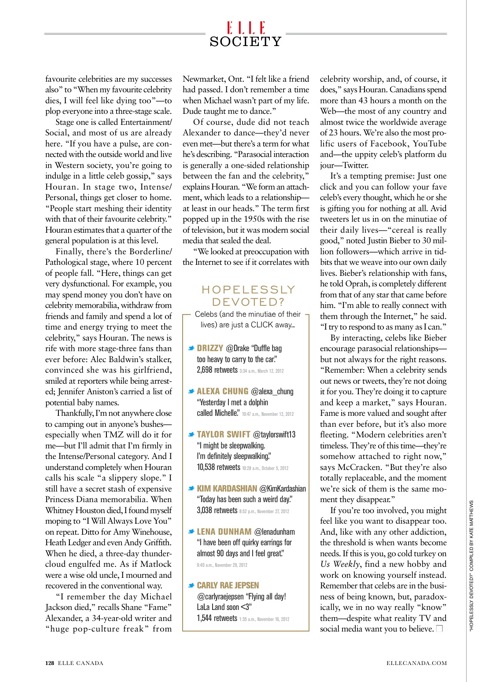