When to worry about your preteen’s idol worship

Like many girls, Marnie Webb’s 12-year-old, Kara, has a serious crush on Justin Bieber. “She listens to his music, buys all his songs and went to his concert,” says the Guelph, Ont., mom. So far Kara’s devotion to the teen sensation is more cute than creepy, so Webb is not too concerned. But when it comes to idolatry, the line between admiration and obsession can be a fine one. News reports are flush with extreme examples: Twilight’s Robert Pattinson was hit by a cab while trying to escape the “fanarchy,” and celebutante Kim Kardashian received death threats when she was romantically linked to Bieber. So how do you know when—or if—your child’s fandom has gone too far?

First, the good news: Teen idolatry is normal and very prevalent. “I’d say at least a quarter of adolescents, if not more, are healthy fanatics of something,” says Dr. Carla Fry, a Vancouver-based adolescent psychologist. Idolatry typically develops around 11 or 12, she says, and though it exists in both genders, girls more often have “love fantasies” of their idol marrying them, whereas boys experience a self-esteem boost when they idolize a sports hero or musician, hoping their “coolness” will rub off on them through association.

Another positive: Fandom signals not just an active imagination but also the characteristics and goals that your child admires and aspires toward, says Montreal-based child psychologist Dr. Julie Brousseau. “It helps them express themselves, their preferences, tastes and personalities,” she says. In other words, if the celeb she likes is squeaky clean versus one who has done time for gun possession or has been busted for drugs, be grateful. But what if your child does admire a celeb with a sketchy past? “It’s important to discuss the values that are transmitted by the object of fandom,” says Brousseau. “Often, preteens idealize some aspects of the person but don’t realize all that is associated with the star.”

A healthy interest in what your child likes is also important, says Brousseau, “because it’s their world.” Webb doesn’t mind supporting her daughter’s fandom—nor funding it—but admits she was apprehensive about buying tickets for Bieber’s concert because it was so far in advance. “I was concerned that Kara might not even like him by the time of the concert,” she says. Luckily, that wasn’t the case and mother and daughter had a good time: “I wasn’t particularly looking forward to it, but it was alright. That hair is like ohmygoodness,” she laughs.

However, says Fry, fandom is a slippery slope. “The line between fantasy and reality can become blurred.” And as an adolescent’s identity is increasingly merged with their idolatry, the obsession can quickly consume more time and money as it begins to take over. “Some kids can lose themselves in fandom and they suddenly feel they could die if they don’t get that concert ticket,” she says. “Look at the time and energy being sucked up in idolatry: If it’s disrupting their ability to function, if they’re always late because they’re checking Twitter or if it’s getting in the way of homework, that’s when idolatry is getting more dangerous.”

By this point, you’re probably not dealing with idolatry anymore. “This is one of those things that can cloak a whole bunch of other conditions, like poor self-esteem and familial issues,” says Fry. If you are worried, Fry suggests inviting your child to talk about the fixation and listen without judgment, asking open-ended questions such as “What would your life be like if Mr. Idol did/did not notice you?” Also, help your child create a healthy association with her idol by differentiating healthy fandom, such as listening to a favourite song 10 times in a row, and unhealthy fandom, like missing school to watch the premiere of the idol’s new music video or crying when she hears unsettling news about the star.

Webb says she knows it is only a matter of time before her daughter’s Bieber Fever will fade away and another thing will take over. “In my day, it was Shaun Cassidy. I remember having his album and some of his stuff, but I don’t remember being totally crazy.” She probably was and has just forgotten—like most fans eventually do when they grow up. This is great news for Kara and her mom—but not so great for the Bieb. 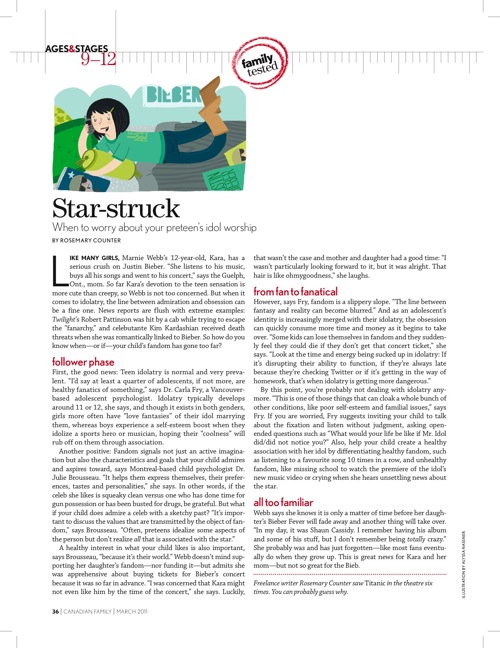