Just imagine Marilyn purring, “Happy Birthday … to the Del!” It’s not so far-fetched; the Hotel Del Coronado – San Diego’s grandest old mansion, best known as the sun-soaked set of Some Like It Hot – is chock-full of 125 years worth of scandals.

The red-roofed great house was first a marvel for its electricity – inspected by Thomas Edison himself before the hotel’s official 1888 opening – and lavish amenities: an Olympic-sized pool, Japanese tea garden and ostrich farm. By the Roaring Twenties and Prohibition be damned, the Del hosted presidents and Hollywood royalty like Chaplin, Valentino, Garbo and Garland. The latter was especially fitting, since they say regular guest L. Frank Baum based his Emerald City on the swank locale.

Rumour also has it – though strongly denied by both – that Prince Edward, then heir to the British throne, first laid eyes on Wallis Simpson in the ornate Crown Room. But it wasn’t the Del’s first illicit love affair; in 1892, solo traveler Kate Morgan checked in under an alias, waiting anxiously for the arrival of her “brother.” When he didn’t show, Morgan shot herself on a staircase. Today, her ghostly presence haunts the corridors – especially the gift shop, where Marilyn memorabilia mysteriously falls from shelves. Apparently, Del’s resident ghost doesn’t like sharing the spotlight. www.hoteldel.com 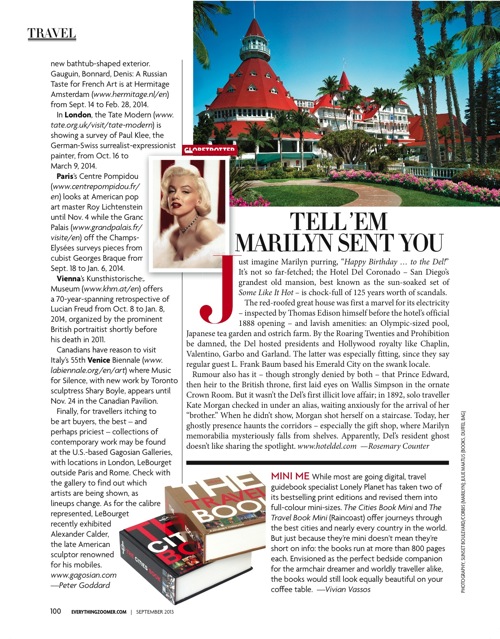