The Case against Forced Vacations

Mandated time off doesn’t do workers any good

Automotive worker Chris is saying thanks, but no thanks to a vacation this year. Having worked at his current employer for almost a decade, the 35-year-old from Barrie, Ont. has accumulated more paid vaca- tion days than he needs, or even wants. “If I had my way, I wouldn’t take vacation at all,” he says. “I have a very strong work ethic.”

Ontario’s Employment Standards Act dictates that Chris is entitled to a minimum of two weeks of vacation per year, which he can forego, provided his employer allows it.

You wouldn’t think he’d have any difficulty clocking out; most people consider time off to be good for minds and bodies, as well as workplace morale and productivity. Yet as a whole Canadians are pretty bad at taking time off. According an annual survey done by Expedia.ca, close to 10 million vacation days went unused by Canadian workers in 2015. Among the most common reasons cited for skipping holiday time were having too much work to leave (32%) or needing the money from vacation pay, which employers are legally obliged to issue in lieu of time off, for other expenses (29%). Count Chris in the latter category: workaholic tendencies aside, he’s come to count on the money that comes from taking a pay-out instead of a holiday.

His company may not be so keen. In Canada, employers are within their rights to order staff to take time off; “It’s black-letter law,” according to Toronto employment lawyer Jason Beeho. They might do so to save money, yes, but also under the aegis of minimizing employee burnout. Canadians aren’t alone in this regard: in the U.S., such companies as Motorola and Charles Schwab, have experimented with forced holidays, and even the government of Japan—a country with a word, karoshi, to describe sudden death caused by occupational exhaus- tion—is mulling mandatory time off.

But before you push your employees out the door with a Mai Tai in hand, consider that people recharge in different ways, and not everyone wants to take time off. For these people—admittedly, not the majority—being forced to relax is not relaxing at all. Even if mandated onto a beach, workers who hate the idea of checking out—and Chris is one of them—would not really relax. “If it’s not taken for the right reasons, it’s not really vacation,” observes Calgary HR consultant Wendy Giuffre, adding that employees only tend to unplug when they want to—not under order.

But that’s not the main reason companies should not force employees vacation. “The truth is, if you’re in the position that you have to mandate vacations, you have other stuff going on,” says Giuffre. The employee may feel the brief reprieve of a holiday is not enough to compensate for a tripled workload awaiting their return. Or they may feel the company’s culture subtly looks down on break-takers.

These are substantial organizational problems, and forced vacation policies don’t solve any of them. What’s worse, such policies take control away from the employee, leading to feelings of powerlessness and disengagement, says Stew Friedman, author of Leading the Life You Want: Skills for Integrating Work and Life.

Far better, Friedman argues, to emulate forward-thinking companies like LinkedIn, Netflix and Calgary’s BluEra, which offer unlimited vacation policies to emphasize that it’s okay to take as much—or as little—time off, as long as employees get their jobs done. Good managers don’t force work or play, he adds, but “find a way to help employees organize their lives according to their own values.” That means giving people the freedom to set their own vacations and, crucially, sending unambiguous signals that taking time off will not penalize them. It also means letting them work when they want to. 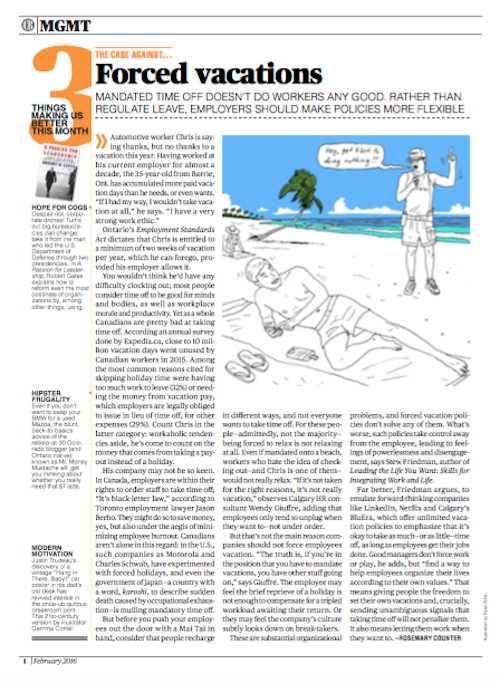