This Canadian Mom-staple is popping up in far posher places

Canadians know Tenderflake lard in an instant: It’s a square pound of snow-white lard in a bright yellow box in the local grocery store’s baking aisle. Moms and grandmas have been stockpiling this lard—rendered pig fat, the highest grade from near the loin and kidneys—in pantries for generations. My own mom, right off the top of her head, offers the only acceptable way to make flaky pie dough: “A pound of Tenderflake, cut into half-inch cubes, then stir in six cups flour. Add a cold egg, a dash of vinegar, and a cup of the coldest water you can find,” she says proudly. “Don’t over-mix! Then divide into six balls for six pies.” (Six pies?! I ask. But that’s nothing: “Once I made 30.”)

Never even heard of Tenderflake? Well, no wonder: the product is proudly Canadian and not readily available in the U.S. Plus, Tenderflake advertises its more consumer-friendly frozen pie shells but not the secret to their flaky goodness, the less-appetizing “pure lard” that Slate magazine called “a ridiculously hard sell.” And lastly, you could blame broader trends and the obesity crisis: “Fats—animal fats in particular—have been vilified over the past century as we struggle with our collective health,” reads Lard: The Lost Art of Cooking with Your Grandmother’s Secret Ingredient. In 1960, Crisco appeared as a vegetable-based alternative and by the 1980s, margarine and spreads like I Can’t Believe It’s Not Butter! hogged the fat spotlight instead.

Just like butter before it—remember its decade of bad press?—lard is cycling back into vogue. At Le Coucou in New York City, executive pastry chef Daniel Skurnick is busy incorporating lard into recipes where butter just won’t do: “The best butters you can find are still just 80-something-percent fat—the rest is water, which produces steam,” he explains. Lard is nearly 100% fat—mostly monounsaturated, trans-fat free—and with a much higher melting point. “That means you’re almost frying your pie dough from the inside out, which is as delicious as it sounds,” says Skurnick. (Also sounds excessive, but hey, at least lard is lower in saturated fat than butter…) “That’s not why I use it—I’m only here for the crispiness,” says the pastry chef.)

Home chefs have long felt the very same way. Kate Edwards, a photographer based in New York and LA, had her grandmother share her baking secrets “before she got too old to remember.” The secret to making pie crusts “the perfect combo of buttery and flaky,” it turned out, was Tenderflake. Grandma, who lives in Michigan and visits Canada often, ships down a crate of the yellow boxes that Edwards keeps stockpiled in her freezer. “It’s pretty much all I have in there. Some frozen steaks, ice, and fifteen boxes of Tenderflake.”

But without “grandma as a hookup,” as Edward calls it, getting your hands on large quantities of lard isn’t as easy as you might think. When chef Silvia Barban moved to the U.S. from Northern Italy, she was shocked by how difficult lard is to locate, even in foodie havens like New York City. “I’ve lived here four years and still don’t find lard every time I go to the market,” says the chef from Brooklyn’s new LaRina Pastificio & Vino restaurant. Barban needs lard for her piadina, Italian flat bread, and lard—or as the Italians more eloquently call it, lardo—is the secret keeping it soft and flaky.

Barban’s heard the murmurs of a better way though: “I keep hearing about this Canadian brand and I’m doing research now as to how I can get it,” she says of Tenderflake. Unlike an 8-ounce artisanal farmer’s market version, with what Skurnick calls “a distinctive porkiness to it,” Tenderflake is standardized, cleaner and neutral-tasting. “Tenderflake is more processed—and I don’t mean that in a bad way,” he says. 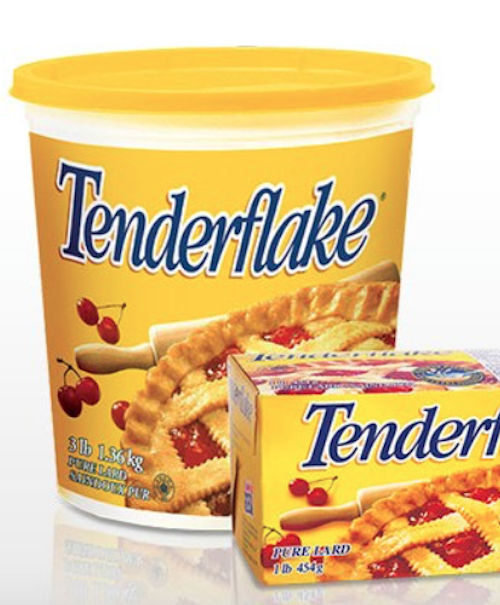