The Joy of eReading

Some of Canada’s most devoted book-loving authors are embracing the eReader. Here’s why

These days it seems like everyone (and their mother!) has an eReader. And with over 3.5 million titles available for instant download, it’s no surprise that eBooks are quickly becoming everyone’s go-to choice to fuel their literary fire. (In fact, Nielsen Research reports that the sale of fiction eBooks is expected to overtake print by 2014). We asked three Canadian authors for their take on the prevailing popularity of eReaders and how it has changed the way they read.

For publishing professionals like Sarah Weinman, a 34-year-old writer and news editor for Publishers Marketplace, the move from traditional books to eReaders wasn’t always easy.

Moreover, for unconvinced booklovers, know that in many ways the eBook might actually work in the book’s favour. Case in point: Weinman’s book of suspense fiction, Troubled Daughters, Twisted Wives: Stories from the Trailblazers of Domestic Suspense, contains the work of many talented authors whose work – most of it long out of print – may have been otherwise lost in time. “Now when people ask how to find more work from the authors in the anthology, I can point them towards luminous backlists of work available in digital format,” says Weinman.

A voracious book-a-day reader, Weinman can satisfy her book habit without overwhelming her apartment, and stay up-to-date in her field (hundred-page manuscripts download in seconds). “It’s so important for my job to keep up not only with what’s current, but also what’s coming next,” she says.

On his 30th anniversary as a full-time writer, during which time he’s authored 22 books including novel-turned-television show FlashForward, science fiction powerhouse Robert J. Sawyer is celebrating another milestone: “I’ve been eReading for 12 years now,” says the forward-thinking Toronto writer. “I was right in there at the very beginning when the first eBook devices hit the market.”

More than a decade later, Sawyer has collected – get ready for this – about 20 different eReaders in his home (so many, actually, that there’s even a YouTube video featuring his ample collection). His pick of the moment, however, is anything with illuminated e-ink. “It’s very new to have devices that are illuminated, instead of requiring passive lighting from another source, and I find it very comfortable to read in just about any circumstances,” he says. (Perhaps Sawyer is imagining the harsh conditions in his new Mars-set Red Planet Blues, where he suspects his eReader would hold up just fine.)

Sawyer also loves the eReader’s customized settings for the most particular of readers. “I like larger text and ragged right margins,” he says, and his Kobo Glo lets him do just that, rather than settle for whatever’s been chosen for him by the book designer. Of course, like most of us who work – and touring writers in particular – Sawyer loves the eReader’s portability. “I like being able to carry a lot of books when I travel, while really not carrying any of them,” he says.

And though his vocabulary is already impressive, being a professional writer and all, Sawyer cannot get enough of a big built-in dictionary. “I find it enormously handy to look words up as I go,” says the lover of classic Victorian literature. “Do you know what the word verdure means? It’s used all the time in Victorian lit; it means ‘greenery.’” Now you know!

Three years ago, when Young Adult author Janet Gurtler opened her Christmas present from her husband – a brand new Kobo eReader – she wasn’t sure what to make of it: “I was happy, but I was also a bit apprehensive. I love all my ‘real books’ so I didn’t quite know if I was going to like it,” she confesses.

Calgary-based Gurtler, a five-time author and mom to a 13-year-old son, had all the usual reservations about new technology: Will I ever get the hang of it? Will it bother my eyes? Will it fit into my lifestyle? Of all people, it was her mother who finally convinced her. “My mom only uses an eReader because of her vision. She can enlarge and adjust the text to read a ton of books that she’d otherwise not be able to,” says Gurtler. “And to me, that’s just awesome.”

As her sixth book, Sixteen Things I Thought Were True, hits bookstores in March, Gurtler can expect a lot of travelling in her future. Once upon a time, this meant carting around heavy book bags, but for travel both business and pleasure – Gurtler has a quaint cabin in British Columbia – the Kobo delivers on content without hogging suitcase space.

Even better? A book on sale (Gurtler loves savvy shopping) costs just a few dollars and saves her from long line-ups at the bookstore. “I’m an impulse shopper, so if a book I want goes on sale, I’ll scoop it up right away. It’s so much easier: I’m at home, I read a review, I download it right then and there.”

Like most of her writer friends, Gurtler’s found a happy medium in the print-versus-digital world. This is good news for her hubby, whose gift became a smashing success. And the first book Gurtler downloaded that Christmas morning? Why her own, of course. 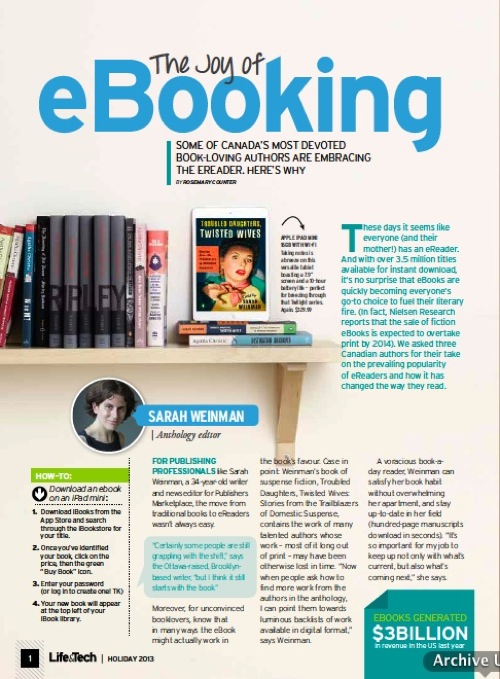 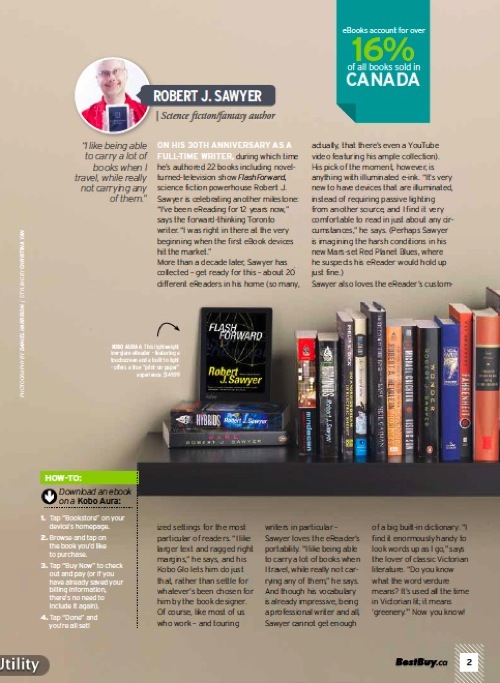 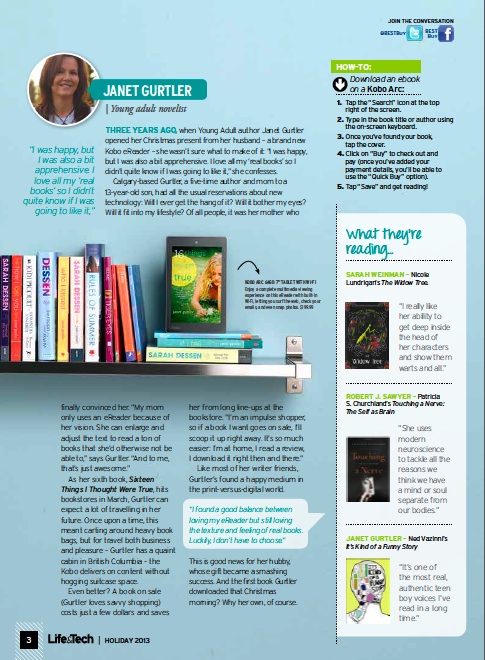