The theme is Red Carpet Affair, and the girls are dressed accordingly — to the nines. High school senior Jenn Byrnes, a member of the all-female prom committee at Erindale Secondary School in Mississauga, smiles widely in her $700 asymmetrical coral dress. She poses for a carefully arranged group photo with friends Katie Moore, Bria Lucas, Nicole Wiebe and Tracie Hutton, each in her colourful prom gown and matching corsage. Holding champagne coupes of pink punch, they giggle “Cheers to prom,” though this is actually the pre-prom party.

That was two years ago, and Jenn, now 20, still looks at the photos all the time. “I hosted 60 people before the prom, plus two parents each, in our backyard,” says the University of Waterloo student, who also threw the after-party (we’ll get to that later). Her parents were totally on board, she notes. “We talked about it all year long. They spent weeks planting flowers for the party so we could all take the best pictures ever.” This year, for Jenn’s little sister, Sarah, they’ll be doing it all again.

Prom, in case you’ve somehow forgotten or haven’t noticed, is a big deal. Case in point: post a general “journalist needs your prom stories!” call on social media and you get a flood of “OMG”-filled expressions of teenage enthusiasm — as well as judgmental groans, some scathing critiques on out-of-control prom culture, a handful of I-was-way-too-cool-for-prom claims and a bunch of laments from nostalgic misser-outers. “I never got to go to prom but always wished I had,” says one respondent, adding a sad-face emoticon for effect. Even for those who never went, even for those still disappointed 20 years later, especially for Jenn Byrnes and her four friends, prom night — with all the attendant meaning and expectation and emotion — is huge.

By all accounts, in fact, the prom has never been more momentous. “I’ve been teaching for 16 years,” says family studies teacher Julie Dippelhofer, this year’s prom supervisor at Erindale, “and it just seems a bigger and bigger deal every year. The word prom comes up in every class.” That’s not a complaint though; Dippelhofer, 45, is secretly psyched too. “It’s always fun, even for teachers.”

Of course, for anyone not going to the prom (or responsible for footing the ever-mounting bill), the more-is-better nature of prom isn’t necessarily a good thing. “This craziness of prom has become something quite unimaginable, sociologically speaking,” says Diane Pacom, a professor of sociology at the University of Ottawa who has researched youth culture for 30 years.

Much like the only event that dares to trump it, the wedding, prom is getting pricier every year. In April, Visa Canada reported that though we lag slightly behind Americans, the average Canuck family spends a whopping $804 on their kid’s prom (outfit, makeup and hair, nails, limo, flowers, etc.). Families with daughters fork out $718 while those with sons spend $875 (proving chivalry’s not dead, boys often buy their dates’ tickets). But in both cases it’s usually the parental wallet that takes the hit: 56 per cent of Canadian moms and dads (compared to just a quarter of American ones) cover nearly the full price of prom.
“Parents are very open to making their children happy, at whatever price it takes,” says Brad Chenkis, a third-generation prom fashion retailer at Vancouver’s After Five dress shop. Chenkis suspects Visa’s numbers aren’t nearly high enough.

Prom isn’t always limited to one night, either. For many teenagers, it’s part of a weekend or even a week of parties, shopping excursions, camping trips and other outings.

To find the root of all this craziness, you have to go back about a half-century. For early baby boomers, arguably the inventors of prom as we know it when they repurposed and recreated the debutante balls of the upper classes, prom meant the end of high school and the beginning of adulthood. And for a populous generation obsessed with themselves and defying their parents — in just a few years, remember, there would be a full-on hippie revolution — prom was theirs for the taking.

“Prom was a crafted ritual by the baby boomers, because in the ’50s and early ’60s finishing high school was a rite of passage in itself,” says Pacom. She views the prom as compensation for postwar North America’s loss of traditional milestones in the growing-up process. “Before the war, roughly, religion offered all sorts of rituals — baptism, communion, confirmation — to introduce young people to adulthood.”

As society became more secular, the prom filled this void by rolling up a whole bunch of firsts into one crazy night, and these firsts have become the stuff of lore. Prom in the ’60s was when, like Marge Simpson, a young woman might first wear her hair “up.” It was the night you might first guzzle (and get sick on) snuck-in booze. It was when you might make out in your date’s dad’s car at Lover’s Point — if he was so lucky. To pre-hippie boomers, prom was the last wild party before inevitable adulthood: a stable job, marriage (to your sweetheart prom date, ideally) and babies.

It’s a slice of nostalgia that you would have expected to go out of style along with elbow-length gloves. Instead, prom has done the opposite. It has grown bigger, more elaborate, taken more forms and shapes, been adopted for all kinds of people, of all ages. In the mix now are second-hand proms (do-overs for the fashion-minded), zombie proms, queer proms and senior proms (with actual seniors). Proms can be fundraisers for good causes, Halloween parties and theme nights at clubs. They can be later-life redemption for teenage misery.
But prom, then and now and despite grown-ups’ best efforts, really belongs to the young. “It’s a moment for teenagers to exercise their imaginations, to invest the prom with new and different meanings,” says Pacom. Even with something as nostalgic as the prom, change is inevitable as today’s teens seek to make prom their own, their way.

The Internet and social media have revolutionized how teenagers interact with one another. A quaint “Will you go to prom with me?” is no longer sufficient; instead, promposals are expected and can go viral on YouTube (more on this in the next chapter). Celebrity culture — and often, the celebrity-sized budgets that go with it — encourage more glamorous and revealing prom attire. School-run Facebook pages allow you to post (and “shotgun,” or lay claim to) your dress before your best friend does. Prom kings and queens are the stuff of stereotypes past; LGBTQ kids are fighting, and winning, the right to bring whomever they like. The modern prom reflects modern times.

And yet, much like when Brenda and Kelly wore the same prom dress in TV’s 90210 that time, some things remain the same. The prom committee is comprised of eager beavers; many too-cool-for-school kids will be boycotting the event entirely. Some Grade 12 boys will bring their younger, non-graduating girlfriends, a travesty to the Grade 12 girls. Some kids will try to smuggle in booze while others will “pre-drink” (but many schools will have staff breath sniffers at the door, and at Toronto’s Northern Secondary School students will be required to take a breathalyzer test). For some, the after-party is the real party. And everyone wants an extension on their curfew.

Prom season is now upon us, and the new prom is the same as it ever was but also bigger and crazier than you remember. What’s new at high school’s culminating event, and how is the prom morphing beyond the teenage years? Grab your flask and corsage; we’re about to find out.

(Like this, do you? Buy the rest right here!) 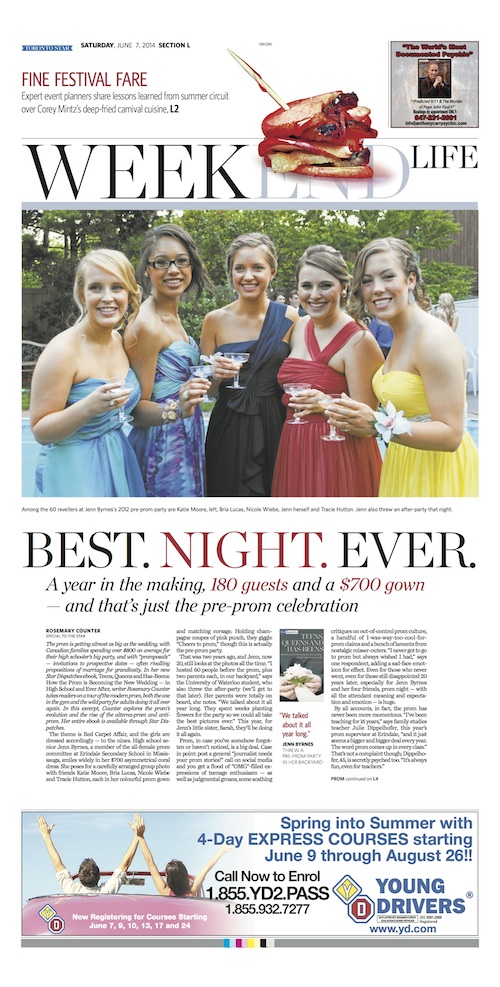 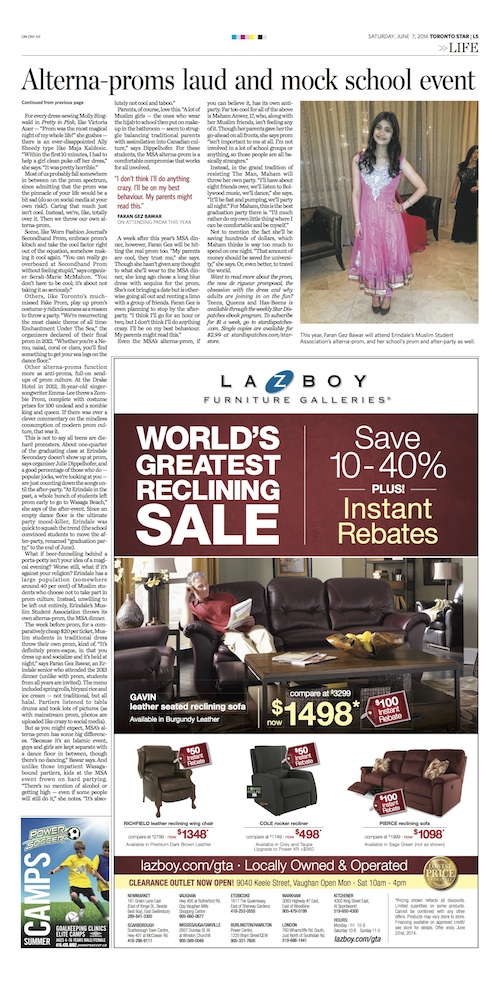 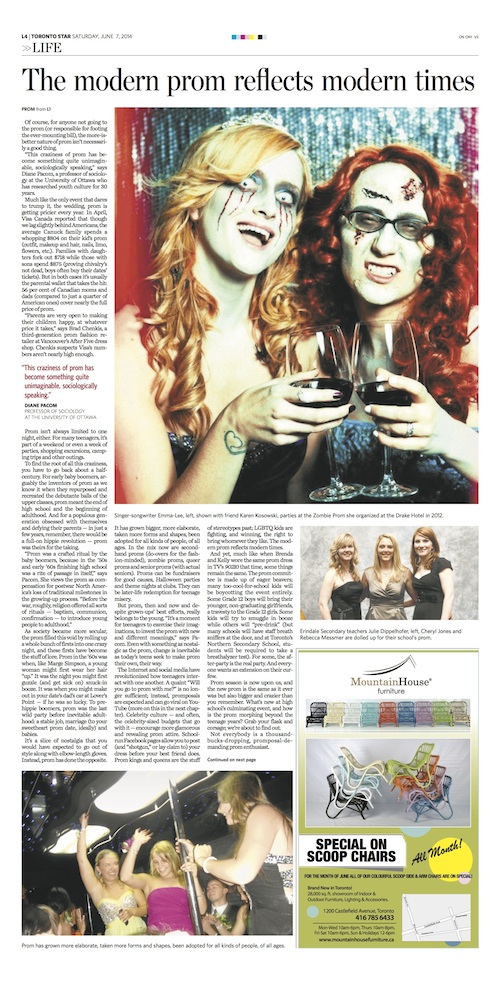