The Name of Love

His name? Or yours? What’s in a married name?

Before Jen Charlton got married, the 29-year-old book editor was adamant: “I was never, ever going to change my name, ever,” she says. Forty years ago, Jen would have been living proof of one of feminism’s greatest hallmarks. Today, however, things aren’t so clear.

Where once a woman had two options—take the hubby’s name or keep your own—today’s marrieds face more choices than ever. In fact, to the Japanese women who recently filed a lawsuit to fight the 19th-century law that insists they take their husband’s name, we must seem spoiled for options. But more choice has only led us to question our options even more: If we keep our name, what will happen when we have children? Will changing our name affect our career? If we hyphenate our name, what will happen when our kids marry other hyphenates? And if we eventually split—after all, in Canada, one in three marriages will end in divorce by its 30th anniversary—will he take back his name?

All of our championing for choice, it seems, has only made choosing a name more difficult. Looking back, there are no easy answers. In 1855, American suffragist Lucy Stone famously refused to take her husband’s name (he was an activist too, and backed her). A century later, Betty Friedan (née Goldstein) published her feminist manifesto The Feminine Mystique using her husband’s name—no one batted an eye. Just a decade after that, Gloria Steinem launched Ms. magazine, taking a stand not just against adopting male surnames, but honorifics too.

“Name-changing falters, comes back, and falters again,” says Michelle Meagher, an assistant professor of women’s studies at the University of Alberta. But regardless of its comes-and-goes popularity, she says, “It’s part of a larger framework of patriarchy and patrilineage. We take men’s names to make it clear that we belong in their families and our children belong to them.”

While few brides today think “I am his now” any more than they promise to honour and obey, the reality is assuming his name may just be simpler. “It’s easier if you have kids, it’s easier for travel, it’s easier for the government and taxes,” says Jen. So at the advice of her married friends, and against all previous intentions, Jen Charlton became Jen Mueller.

At least she’s on trend. According to a 2009 survey by Vancouver-based I’m a Mrs., a service that does the name-change paperwork for you, 82 percent of Canadian brides will change their name, taking their husband’s surname. (In Quebec, women can only “assume” their husband’s surname, as marriage isn’t listed as sufficient grounds for a name change.) Another eight percent will hyphenate—proving hyphenation, very popular throughout the ’80s, has gone the way of fingerless gloves. Less popular, at a measly seven percent, is our lost girl-power trademark: keeping your own name. (Sorry, Steinem.)

Still, there are others getting creative outside the mainstream—men taking their wife’s name, and couples merging names or picking a new name to share. For brides still struggling with their choice, there’s yet another option, the hybrid, where you use your name at the office and your husband’s at home. “If you want to adopt a family name but also protect your professional identity, the hybrid choice makes a lot of sense for a lot of women,” says Jo-Anne Stayner, co-founder of I’m a Mrs.

Indeed, after changing her name, Jen noticed that her clients stopped recognizing her emails. Though not keen on the hyphen, Jen added it to work correspondence. And so that people could find her on Facebook, she hyphenated there too. Still, a bigger issue was at hand.

“I struggled with it more than I thought I would,” says Jen. “Not because I’m taking a feminist stance, but because it just doesn’t feel like me. I feel like Jen Charlton.” For many women, including feminists like Stone and Steinem, it’s exactly that question of identity that’s at the core of the name-change debate. But identity is often trumped by tradition, especially during wedding season.

For Catherine Lash, however, traditional marriage and retaining your identity aren’t inherent opposites. “It’s almost like we had to rebel, but now we’ve realized it’s not so bad,” says Lash, editor of The Wedding Co., a blog by the experts who produce The Wedding Show in Toronto. Lash notes that brides and grooms are older now—the Canadian average is 28 and 30, respectively—and know themselves better. “I think it reflects a maturity level,” says Lash. “Women feel they can maintain their individuality within their marriage even if they change their name.” In short, it’s OK to take someone’s name because I know who I am.

Turns out Jen Charlton knows who she is: Jen Charlton. She’s going back to her maiden name. Her husband doesn’t mind: They have a past of turning tradition upside down. They walked each other down the aisle, after all. 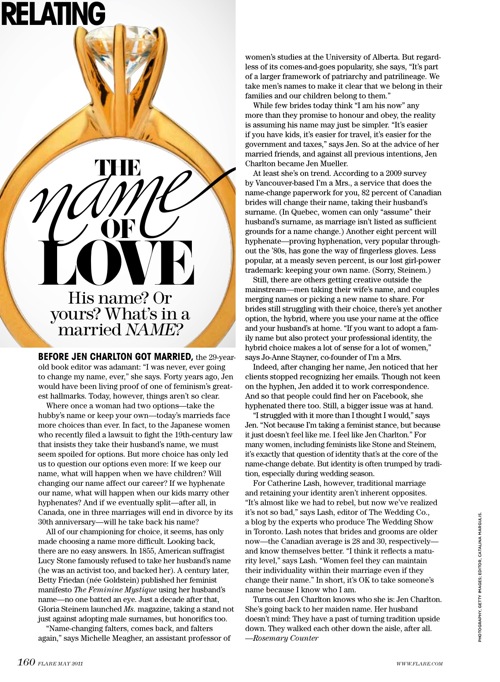