Bad boyfriends and the curse of “just friends.”

There was one lonely message in my inbox: “I miss our friendship.”

I met Michael a decade ago on my first day of university. Or, more accurately, I saw him from across the lecture hall in an English class full of hundreds of eager students scribbling in their notebooks. Meanwhile, I couldn’t even decide on a major.

The next day, in the class’ corresponding tutorial of just a dozen students, I saw him again. This time, I braved a smile. While I conveniently loitered outside on the steps afterwards, he asked me first to grab a coffee and then if I’d like to go splitsies on a pack of smokes. It was a big “yes,” even though I didn’t smoke.

Time flew over coffees and then drinks—which morphed into a marathon 12-hour hangout session. At one point he lazily plucked a leaf from a nearby tree, shaped it into a heart and placed it in my palm. Now thoroughly convinced I’d met the man of my dreams, I asked if he’d like to see my new dorm room.

This also isn’t a one-night-stand story. I wish I had been that clever.

“I’m so attracted to you right now,” he said, perched on the edge of my foam mattress and gazing lovingly into my eyes. He’d been saying all the right things for hours. Then, a curveball: “But I feel so guilty too,” he added. Time slowed right down again. “I have a girlfriend of three years. We live together. I thought I should probably tell you.”

It was the most understated “probably” I’ve heard to date. It was 11 hours late, completely misplaced in my bedroom and seriously squashing my buzz. Or not, as I like to (even now) blame the afternoon beers for my overdramatic reaction to his confession: I pushed him hard against my still-empty bulletin board and told him to get out. He did, apologizing the whole way, and said he hoped we could somehow stay friends.

And so, after a much-needed cool-down week, we began a beautiful, albeit dramatic, so-called friendship. Just friends, of course, as I was no home wrecker. I was the product of happily monogamous parents who still flirted with each other at restaurants. All my closest friends were women—strong women—and I considered myself an excellent girlfriend to them. I majored in women’s studies, for heaven’s sake. (I’d finally decided.) So, “just friends” it was.

My new just-friend and I did all the normal just-friends things. We had coffee dates and caught romantic jazz shows. We “accidentally” ran into each other more and more often. We played hooky in favour of too-close lie-down sessions in grassy fields in the sunshine. We split litres of wine and discussed what it would be like if we were together—but, of course, we could not, must not, even consider it at the moment. Needless to say, when I wasn’t busy with looming guilt, I considered our future almost constantly.

But since I’m only human, and since I had a facade to maintain, I dated elsewhere and everywhere. On the surface, I was fun and independent—a perfect strategy, said all my well-meaning friends, who had my back the best they could but were secretly hoping I’d soon move on.

Dig a little deeper, however, and I wasn’t so girl power: I desperately wanted an official boyfriend to level the playing field, to make Michael jealous, to make me forget about him entirely. A good plan, in theory, but something had already shifted in me. I had been cursed.

Suddenly, it seemed that every handsome stranger I met soon confessed to having a boring girlfriend on the home front. Like Michael, they were all thinking of leaving any day now. I assumed I was the exciting alternative they were considering leaving her for, and this made me feel exciting—and excited. Everything was wrong and shameful; guilt started to feel normal and then good.

Amid my many adventures, there was Adam, a gloomy fellow I met in a gloomier club and let hold my hand as he walked me home. After a dozen poetic emails—he was a philosophy major, natch—he confessed to a better half. But I was even better, he insisted, acting all tortured and torn about it. We just-talked for months before I grew bored of decoding his emails with a dictionary and disappeared.

By then, I had met an older gentleman on Craigslist who, for two glorious, wonderfully romantic weeks, showered me with expensive gifts and flowers. Finally, I boasted to my friends, my luck had rightfully come around. I was at last getting the attention I deserved. Then he tearfully confessed to having a wife and toddler, and I never heard from him again.

At work, a hunky chef took a very unprofessional liking to me. He and his lady friend had an “open thing” happening, he mentioned casually, a don’t ask/don’t tell policy (or, as it applied to me in practice, a don’t text/don’t call him policy) that—though I never heard this confirmed from all sources—seemed to work swell for the involved parties. And since he didn’t feel a single ounce of guilt over our late-night meetings, I justified often and relentlessly, why should I?

While it wasn’t something I ever consciously sought, my other-woman curse moved from bad luck to bad habit to way of life. If someone already had someone, I could relax around him. This felt so good that it made me like him, and my no-pressure ’tude tended to have him liking me too. I didn’t believe much in men anyhow at this point, and it was much safer to hold tight in the periphery. As much as it sometimes hurt to be the other woman, I told myself again and again, at least I wasn’t a naive girlfriend.

Until the day I was. Years into our just-friendship, Michael called me with big news: He was single and available. (He never mentioned, and I never asked, if he’d finally realized our fated love or if his girlfriend had tossed his sketchy ass to the curb. For convenience’s sake, I imagined the former.) He was crushed by the breakup, he said, and he needed my friendship now more than anything. Two bottles of wine and a friendly heart-to-heart-turned-all-nighter later, we were officially no longer just-friends.

A sexy notion, yes, but, spoiler alert: Moving from understudy to headliner isn’t easy. I felt no pleasure—just pressure, which immediately began building up around me. My mind raced with regrets and what-ifs, I obsessed over his thoughts and whereabouts and more than once I dreamed that he had reconciled with his ex. All the guilt and insecurity I had never allowed myself to feel over the years were pouring out of me at the worst times. Within a week, I had my first panic attack.

Though I tried my best to conserve it, the image I had created and perfected—the sexy, carefree alternative to his difficult, complicated girlfriend—was shattered almost instantly. Conversations, when I could think of something clever to say out loud, became tense and forced. After all that, we had nothing in common except a propensity for betrayal—and no one to betray but each other.

So, true to form, just a few awkward weeks later, Michael had more big news. He was sorry he hadn’t returned my calls this week, but he’d met the girl of his dreams. She was awesome, he gushed, and he thought she was the woman he was destined to marry. I wasn’t angry or even surprised—just relieved. I wished him luck, and I actually meant it. That was the last time I heard his voice.

Sure enough, in a few months I heard a relayed update from a friend of a friend. Michael had indeed got hitched, just as he’d predicted, to a nice girl in a small, traditional ceremony. I didn’t reach out to him with congratulations, but I didn’t begrudge their happy marriage either.

Then, the weekend after the wedding, he emailed: “I miss our friendship.”

For a fleeting moment, I felt sick to my stomach. And then, just as quickly, I felt better. I only let myself think about it for a minute and then asked myself: Did I miss him too? Was just-friends a friendship at all? My internal answer was a “no,” and then an even bigger “no,” and the realizations made me feel far better than he’d ever made me feel. I can’t say with certainty that this exact moment cured me of what I thought was my lot in life, but never again have I been anything but headliner in my relationships. Michael taught me—the hard way, no less, though I’m sure I needed it—a new set of expectations for myself and the people I let into my life and my inbox.

So, even though I hate to admit it, I suppose in retrospect I’m even grateful for our just-friendship, whatever it was. Not grateful enough to respond to his note, however. 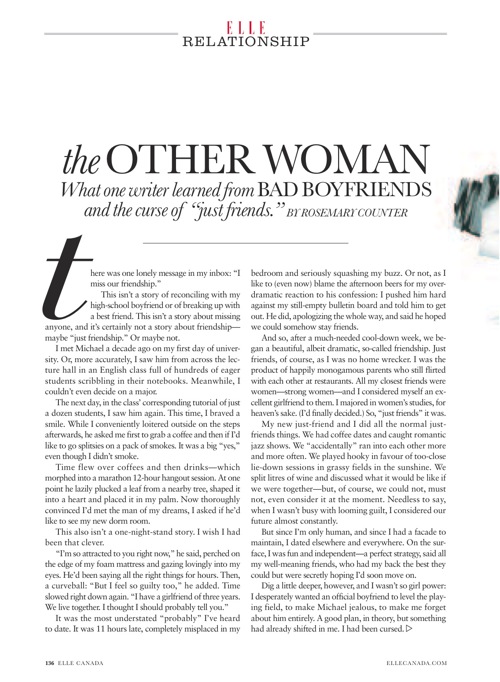 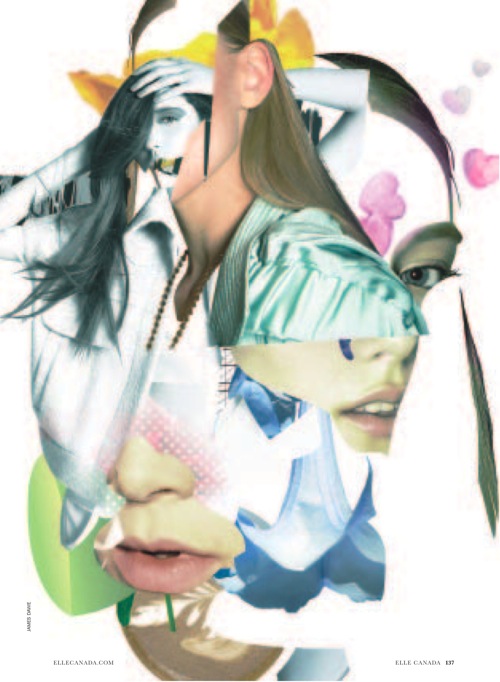 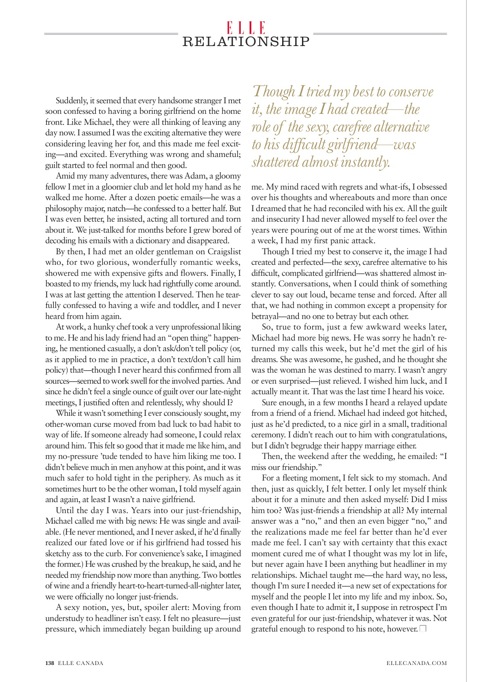