The Super Bowl for comedians

As the celebrity roast goes mainstream, the censors are sharpening their scissors

There was no shortage of snark last weekend at Comedy Central’s roast of Roseanne Barr. “Normally when I roast a pig, I put an apple in its mouth,” said stand-up comedian and roastmaster general Jeff Ross. “You got a gastric bypass in 1998, and then you beat it!” zinged comedian Anthony Jeselnik. Barr’s ex, Tom Arnold, added, “She actually had ‘Property of Tom Arnold’ tattooed on her hip, which made me the fourth-largest property owner in California.”

Harsh, yes, but not if you’re a comedian. “There’s a misconception that the roast brings someone down, but it’s actually the opposite,” says George Reinblatt, a Toronto-based comedy writer whose jokes have aired on Comedy Central roasts and Just for Laughs.

“The point is to honour somebody’s career.” At the birthplace of the roast, the Friars Club in New York, one of their mottos is, fittingly, “We only roast the ones we love.” The private mens’ club—women weren’t allowed in until 1988—was mocking celebrities in what they called “smokers” as far back as 1910, though their first official roast (of French actor Maurice Chevalier) was held in 1949. Dean Martin hosted TV roasts between 1974-84. To the lovely Lucille Ball: “How about you, Luce? That’s what the football team used to call her!”

Andrew Clark, a humour writer and director of Humber College’s comedy program in Toronto, says the appeal then was “seeing celebrities being informal and taking shots at each other that broke down their public personas. Also, you were sure these people were hammered.”

These days, celebrities can’t stop behaving badly in public. Though Comedy Central has been broadcasting roasts since 1998, it was last year’s roast of Charlie Sheen that brought a truly mainstream audience—6.4 million viewers, nearly double the network’s former record. Sheen’s only caveat was that they remove one mention of his mom.

“Sometimes people cross the line, and everyone has a different line, but the point is to get as close to the line as you possibly can,” explains Reinblatt. As roasts move from comedy clubs to national television, a clearer line is being drawn and, consequently, crossed.

At the Roseanne Barr roast, one of Ross’s jokes to comedian Seth Green was edited out of the broadcast. “Seth, congratulations. You haven’t gotten this much attention since you shot all those people in Aurora,” he said, referring to the Colorado shooting in which 12 died and 58 were injured.

“I’m not surprised they took it out,” says Humber’s Clark. “It would have to be one hell of a joke to leave it in.” That said, censorship may be the kiss of death for the roast. “ ‘Too far’ should be all in the eye of the audience,” says Reinblatt. And, of course, the roastee: “If the person you’re roasting breaks into tears, then you’ve failed.”

A good roast is “the Super Bowl for comedians,” says Amy Schumer, a roaster of both Barr and Sheen. As a longtime fan of Barr—“she helped raise me,” she says—Schumer’s set, like all good ones, walks a fine line of mockery and affection. Among her one-liners: “You look great now. Too bad you didn’t look like this when it mattered.”

“A good joke surprises the crowd,” says Schumer. “You think you’re being set up for one thing, but then the formula is switched up.” Not an easy task when 10 comedians, all with the same limited material—Roseanne fat jokes, for example—take the same stage. The result is a showcase of comedic skill. “Roasters always need to find a new angle that nobody else has hit on,” says Reinblatt, which is especially tricky when, like Sheen, every late-night host in the world has being doing it ﬁve nights a week. “The first person might say your joke word for word. That’s part of the game.”

Clark says roasts are popular because comedy is at a zenith, especially the behind-the-scenes variety like 30 Rock or Louie. “People see the technique, talent and conscious artistry to it now.” Once the voyeuristic thrill wears off, so will the celebrity roast. Comics, however, won’t ever change. “I love sitting around trashing my friends,” says Schumer. “We do this every night.” 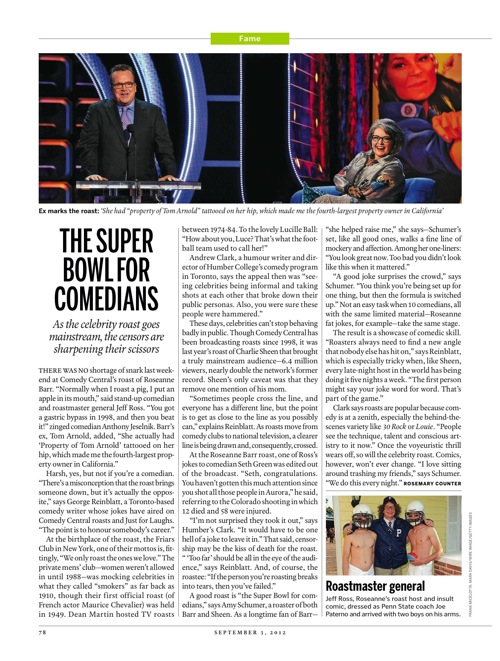