A more responsible journalist might have passed on this review – conflict of interest, professionalism, blah blah blah – but this one could not. So, in the interest of full disclosure, a confession: This review is more biased than Tina Fey is popular on Emmy night. That, and I think I’m in love with her.

My girly crush – and yes, I know she’s yours too – runs far deeper than Bossypants, Fey’s much-hyped humour book that sparked a reported $6-million bidding war. It goes before 30 Rock, Fey’s critically acclaimed but modestly viewed NBC sitcom, back to when she was Saturday Night Live’s new head writer – the first woman to score the gig, and was all humble about it. My love sparked when she penned Mean Girls, the best movie to declare a classic when you’re looking to deeply offend film snobs. And all while being and staying happily married, mothering a super-cute novelty-costume-wearing child, and wearing glasses.

In short, Tina Fey makes me depressed that I’m not Tina Fey. Luckily, Bossypants – despite its telling but also mildly sexually confusing cover of Fey’s head on a man’s body – is a very satisfying consolation prize.

Everything from the advance praise (“Totally worth it”: Trees) to her jacket biography (“Tina Fey lives in Denver with her ferret, Jacoby”) is appropriately Feyed. Her author photo isn’t the new glam Fey – thin and hot, despite what she’d have you believe – but her childhood self, complete with tragic bowl cut and mini colonial-style collared shirt. Her “tales of anxiety and cowardice” go from then, a late “change-of-life baby” in the quaint Philadelphian suburbs, to now, as the queen of comedy in a $3.4-million Upper West Side apartment (pics online, stalkers).

But whether you’re someone who harbours fantasies that she will read this review and adopt you, or whether you think she’s a “pear-shaped overrated troll” (source: the Internet), Bossypants will put you promptly in your place.

For those on Team Tina, Fey writes a wisecracking suburban girl’s account of making it big in the male-dominated comedy scene. Feminist overtones are plentiful (“People have asked me, ‘Is it hard for you, being the boss?’ You know, in that same way they say, ‘Gosh, Mr. Trump, isn’t it awkward for you to be the boss of all these people?’ ”) as is her support for gay rights: to Palin supporters, “I think gay people are just as good at watching their kids play hockey as straight people.”

Her real-girl attack on beauty standards – be it lady lunch arms, FUPA, nasal labial folds, bad nail beds, saddlebags or the dreaded five head – is fierce, mostly: “[Airbrushing] is appalling and a tragic reflection on the moral decay of our society … unless I need it, in which case, everybody be cool.”

That’s lot of hypocrisy for the haters and Sarah Palin to work with. For them, Fey’s a cutthroat mean girl beneath the guise of the high road. In a particularly mordant chapter, Dear Internet, Fey responds to anonymous online comments, such as this kind gem: “Tina Fey completely ruined SNL. She has not a single funny bone in her body.” Fey agrees and responds diplomatically – ”Everything you ever hated on SNL was by me, and anything you ever liked was by someone else who did it against my will” – but can’t resist a well-placed zinger: “P.S. You know who does have a funny bone in her body? Your mom every night for a dollar.” Burn!

It’s Fey’s biting wit – lovely as long as it’s not directed at you, am I right, Paris Hilton? – that carries her almost effortlessly (this is no memoir of endurance) from drama at the University of Virginia to the Second City stage in Chicago to nailing an interview with Lorne Michaels and working her way up the SNL ladder. From there, a plumper Fey – “I once left a restaurant in the middle of dessert to get to Krispy Kreme before it closed” – was just 30 pounds away from becoming on-air material, which she drops between commercial breaks.

The rest is essentially 30 Rock – Harvard Guys, feeding “Irish ballbuster” Alec Baldwin’s ego – so if you like the show, you’ll be thrilled to know Tina’s exactly as you’ve always hoped. But don’t expect any shocking revelations, as Fey’s mostly tight-lipped about her family and never one to emotionally overshare, leaving her deepest self right where it belongs, in the best-friend fantasies of funny girls everywhere. And if Fey wants to boss me around the whole time, that’s just fine.

Thanks to Tina Fey, writer Rosemary Counter is now willing to wear her glasses in public. 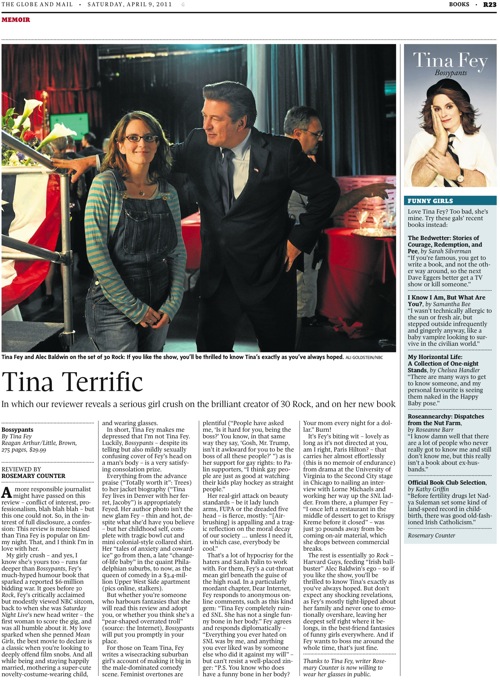