Sarah Hampson says, ‘Women want to tell the nightmare of the marriage as eagerly as they once promulgated its fairy tale’

Beginning on New Year’s Eve – arguably the second-worst day of the year for singletons – Globe and Mail columnist Sarah Hampson finds herself surrounded by couples at a dinner party. It’s “a situation in which I have become perfectly comfortable,” she insists, but a sappy marriage proposal (not to her, natch) and a walk home through the snow have Hampson, just the turn of a page later, in an all-to-familiar funk.

“Am I always gonna be alone?” Hampson asks another divorced MLW. That’s her shorthand for midlife woman: highly educated and financially independent, but also the least marriageable (“a cruel irony,” she adds). Fuelled by gloom and cognac, Hampson spills her story: She’s turning 50, divorced from her husband of 18 years, her three boys are topping six feet, and she’s recovering slowly from marriage as a fairy tale. She has channelled all this into a decent living writing about “life outside the marriage bubble.”

But first, back to the bubble. Hampson’s parents, married for 55 years, taught her that “marriage is the glue of life.” She rebels for about a minute-and-a-half, at the fiercely feminist Smith College, where she runs topless through the streets and “lapped up the feminist message.”

But just three months into her first job, Hampson becomes romantically involved with one of the partners; he’s “established and successful,” 13 years her senior and married with children (scandal!). By 25, she’s married, pumps out three babies in four years, and quits her job. So much for Smith.

Hampson then skips the good years – assuming there were some – and we meet her again as she rounds the big four-oh (oh, oh). Domestic bliss isn’t blissful, sexual advances are unwelcome and Hawaiian vacations cause untimely beach tears. By now, Hampson’s unhappiness has her seeing a shrink (hubby won’t go, of course), her writing career is well in the works (you can bet he doesn’t like that) and she yearns to explore how “women want to tell the nightmare of the marriage as eagerly as they once promulgated its fairy tale” (ouch!).

Into her own post-marriage story, Hampson weaves interviews with self-help authors, child therapists, her troop of sassy gal pals and even celebrities. She scores sex tips from Helen Gurley Brown and relationship advice from Leonard Cohen (“You just need to find someone to go to dinner with, to sleep with from time to time,” he says). She doesn’t miss even one icon of modern mature singledom – Diane Keaton, Oprah, Jane Fonda – and boasts of having particular girly crushes on Nora Ephron and Hillary Clinton (but who doesn’t?). She finds a good balance between the personal and the professional, humour and nostalgia, and even men and women. Noticeably absent, however, is her ex.

Since penning a divorce memoir without trashing your ex is difficult, even impossible, Hampson is careful to acknowledge that “all marriages have two sides, two stories, which is why they’re tricky to write about.” But passing stabs subtly paint her ex-husband in a horrible light: “Most divorced couples I knew told each other first of their plans to remarry … Eric hadn’t shown me that courtesy,” or, “Four years after our separation, he had flown in for Nick’s graduation – the first time he had come to see his son.” The text screams for his voice, an explanation, at least, which never comes (an interview with the ex, I suppose, is wishful thinking). By this point, things are awkward; Hampson gives either too much or not enough info, trying admirably for the high road but unable to withhold a bitter quip.

That’s not to say Hampson is always bitter, but it happens. She characterizes most married people as delusional robots and lionizes the boomers as if they invented MLW-singledom. But more important, she is brutally likable, her writing smooth and honest and self-deprecating, her story real and relatable. And even better, no dude rides up in an Audi to save the divorcée in distress. Take that, fairy tale. 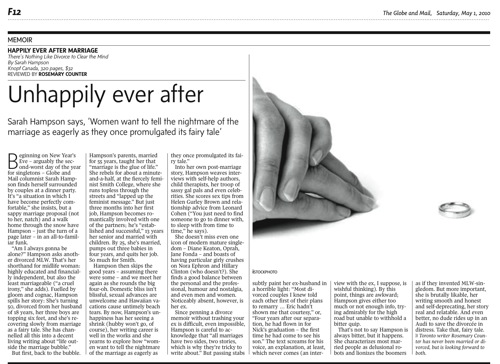