Walk a Mile in Michelle’s Manolos

If you ever meet the Queen, there is protocol to follow: subjects must call her “Your Majesty” on first reference and “ma’am” after, and a bow or curtsy is not a bad idea. Most important is the “no-touch” rule: let the Queen extend her hand to you, and shake without squeezing or lingering. Do not touch the Queen’s shoulder, kiss her cheeks, or hug her.

Unless you’re Michelle Obama. In this case, crack a joke and go in for the embrace.

“Michelle hugs everybody, that’s her spirit,” says Newsweek writer Allison Samuels. The first time she met the first lady was backstage at an awards ceremony in Atlanta, when security guards tried to stop Samuels’s mother from approaching Obama, who intervened. “She said, ‘Don’t make mama leave, she’s gotta stay!’ Then Michelle gave her a big hug. My mother still talks about that moment.”

It’s not what we’re used to from first ladies, but Michelle Obama—real, down to earth, accessible—is like your best girlfriend. When challenged to a push-up competition on The Ellen Degeneres Show last month, Obama removed her jacket and dropped to the floor. (The first lady won by a landslide.)

Good television, yes, but is it good etiquette? “Truthfully, I don’t even think she cares about that stuff,” says Samuels, the author of What Would Michelle Do?: A Modern-Day Guide to Living with Substance and Style. In the vein of two similar books by different authors—2005’s What Would Jackie Do? and 2008’s What Would Audrey Do?—this is a lifestyle guide to fashion, friends and family according to Michelle Obama.

For example, it exhorts readers to pick a theme song (the book suggests something by Chaka Khan), own their accomplishments (and their mistakes), and take risks. Do make lists and timelines, write thank-you notes, and read three newspapers a day. But don’t covet others’ lives, let your anger at your husband’s absences get the better of you, or spend too much time with your BlackBerry.

Noticeably absent is any use-this-fork protocol. “Michelle’s about strength and education; the style and etiquette came later,” says Samuels. “Michelle grew up poor, but had the brains and dedication to get scholarships, to graduate from Harvard Law, to push herself forward—but not by meeting a man. This is what makes Michelle a modern-day icon.”

That said, don’t pick a dud either. An old joke has the first lady bumping into an old flame at a diner. The President says to her, “Just think, if you’d married him, you’d be the owner of this lovely restaurant,” to which she replies, “No, if I’d married him, he would be the President!” The same story has been told of Hillary Clinton and Barbara Bush, but in this case, one of Obama’s Harvard professors told Samuels he wouldn’t have been surprised if Michelle Obama had become president.

Even if you’re smarter, let your husband shine. “During the first election, people found her overpowering and a bit intimidating. When she realized she was hurting him, she toned it down. She lost the corporate outfits, she softened up,” says Samuels.

Be sure to dress the part. You’ll see Obama in dresses, cardigans and pearls, but she does take some chances. “She wears Jason Wu and Alexander McQueen, but also Banana Republic and the Gap. She’s the first first lady we’ve had in years who really loves
fashion.”

Don’t judge others too harshly; learn from their mistakes. “Any comparison of first ladies should be couched in comparing the times,” cautions Toronto etiquette writer Karen Cleveland, who calls Obama “the antithesis of pretension.” Despite our tabloid culture, she “humanized and modernized her role so she’s very easy to identify with.”

Ultimately, be a role model. Samuels says Obama is important to young African-American women: “Michelle’s an icon because she teaches us that you can make your own fairy tale,” explains Samuels, emphasizing that when Michelle met Barack, he had holes in his shoes and drove a junker. “Reality shows teach young girls to go get a rich baller—a basketball player or a rapper,” she says. “But don’t be like that. Don’t be a Kardashian; be a Michelle.” 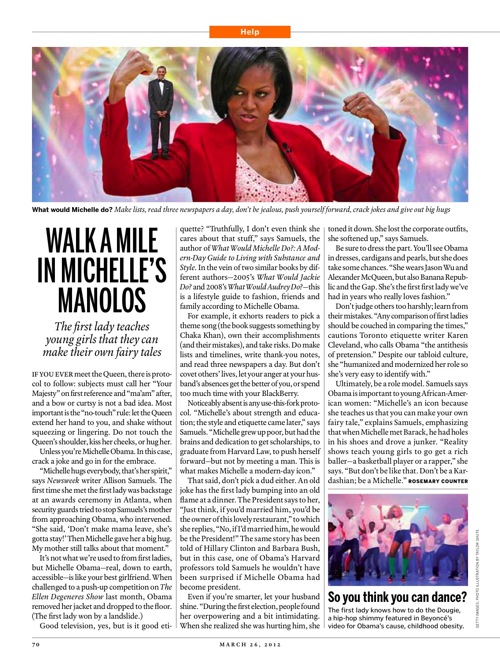