On April 15th, fashionistas and glitterati will gather along the red carpet at the Fairmont Royal York for the third annual Canadian Arts & Fashion Awards (CAFA). It’s a ‘fantastic platform to champion Canadian designers on an international scale,’ says executive board member Nadja Swarovski, whose Swarovski Award for Emerging Talent will honour the newest and most innovative designer rocking Canadian runways. At stake is a $10,000 cash prize, international recognition and — perhaps best of all — enrollment in a yearlong mentorship program with the country’s top fashion brains. But before the big winner is revealed, we met the official 2016 nominees and let them ask each expert a single question about bettering their business. Here’s what they said.

BEAUFILLE by CHLOÉ AND PARRIS GORDON
Toronto-born sisters, 28-year-old Chloé and 26-year-old Parris, have long been fashion opposites. “She was wearing big poofy gowns to kindergarden while I rooted through my brother’s closet for clothes,” says Chloé. But for all their differences, when the big sister landed at the Nova Scotia College of Art and Design, the little sister followed. While Chloé studied fashion, Parris learned about jewelry and metalsmithing, so a post-graduation collaboration was inevitable. They founded as Chloé comme Parris in 2009, showed at Toronto Fashion Week in Spring 2011, and rebranded as Beaufille in 2013. “It’s a made-up, nonsensical French word that means handsome girl,” says Parris. All these years later, they’re still playing with tomboy via girly-girl, hard versus soft, romantic and edgy. “It’s so important to have a balance,” says Chloé.

ASK THE EXPERTS:
Suzanne Timmons, Senior Vice President and Fashion Director at Hudson’s Bay, What’s one thing you wish you knew before beginning your career?  “I would put more emphasis on cultivating professional relationships early on in my career. There are so many pieces to building a brand, and a strong network of support over many disciplines is key to success.”

Richard Simons, Vice President of Simons, Do you have a “life hack” that makes daily life more manageable?  “Instead of having a to-do list, just do it right away!”

Natasha Koifman, President of NKPR, What’s your favourite part of working in Canadian fashion?  “It’s a realm that has so much opportunity. I believe the perception is shifting and we’re finding more Canadians inclined to support homegrown talent, and that opens the door to exciting partnerships, alignments and awareness tactics for our designers.”

MATTHEW GALLAGHER by MATTHEW GALLAGHER
The baby of a big blended family of seven, 29-year-old Matthew was doodling designs in his notebook by junior high. Always on the move—born in small-town Nova Scotia, Matthew’s lived in Montreal, Calgary, NYC, Milan and now Toronto—he initially thought he wanted to be a movie star, but an obsession with Old Hollywood and Alfred Hitchcock films led instead to a career in fashion. “I love how everyone’s so put together,” he says. “It’s like how our grandparents were; I never saw my grandmother go out without hair, makeup and the full outfit.” His eponymous collection, launched at Toronto Fashion Week 2012, blends soft pastel hues with bold structure. “I like to mix ultra feminine with downtown cool girl, because I think every woman has both.”

ASK THE EXPERTS:
Richard Simons, What financial advice  would you give an emerging designer?  “Being properly financed can be very challenging for a young designer. The most important advice I could give would be to surround themselves with experienced people. Having the right agents, and being in the right stores, will make all the difference. Many designers have created beautiful collections in the past, but have failed with the implementation of production and administrative tasks. Make sure you are well organized.”

Natasha Koifman, What’s the best way for an emerging designer to self-promote?  “I always suggest working with an end goal in mind. Identify your target audiences, and then work backwards to develop a way to reach them. Social media is key for this. It’s a cost-effective way to go direct to the consumer, and to showcase the brand story and offerings in your own voice.”

Suzanne Timmins, What traits are most valuable for a designer to last? “In a perfect world, we would all have a good balance between our left and right brain—but very few of us do! Being an outstanding designer is only one part of the equation. In order to succeed you must understand the business of fashion; know your market, understand your target customer, have your finances in place, and have a long-term vision for your brand. Creativity and business savvy must go hand-in-hand.”

UNTTLD by JOSÉ MANUEL ST-JACQUES AND SIMON BÉLANGER
“I saw this cute guy at the bar so I walked up and introduced myself,” says 29-year-old José. They bonded until the Montreal bar closed, at which point someone mentioned work. “It was like, I’m in fashion, no way, me too!” They moved in together a month later, did the long-distance thing to Italy for Simon to do his master’s degree, then reconvened in Montreal for La Collections. “It’s the French Project Runway,” says 34-year-old Simon, whose immediate callback inspired José to apply too. Long story short, they won, banked $100,000 and turned the final challenge—a complete clothing line—into UNTTLD, a collection of innovative women’s wear incorporating leather, feather, zippers and chains. They’re focused now on making UNTTLD more marketable for day-to-day. “We’re still doing the edgy stuff we’ve always done,” says Simon, “but with a market consideration about what real woman want.”

ASK THE EXPERTS:
Natasha Koifman, How can we bring more soul to Instagram and Twitter? “Fashion brands can fall short by not infusing a point of view into their social media channels. They tend to play it safe on social media vs. being brave enough to understand their target consumers. I encourage our clients to partake in branding exercises to determine their mission, values and voice.”

Richard Simons, How can physical retail stores adapt to the e-store explosion?  “The e-store is really an extension of the bricks-and-mortar locations; the two have to work hand-in-hand and the future is really about embracing both platforms. Our online site is definitely a tool for many customers to view our offerings prior to a store visit. The physical store also has its advantages like touching, seeing and feeling.”

Suzanne Timmins, What considerations do you have to satisfy before introducing a brand in your stores? “We look at the bigger picture and ask ourselves, ‘What are our customers looking for and what are we missing?’ This helps to inform our buy and build our brand matrix. However, business analytics are only part of the decision-making process. Just as often ‘the gut instinct’ kicks in and we have a sense that something or someone is going to be the next big thing!”

3.PARADIS by EMERIC TCHATCHOUA AND RAYMOND CHEUNG
Decade-long BFFs Emeric and Raymond, respectively from Paris and Hong Kong, met in school in Montreal in 2006. “Even then, I was interested in fashion,” says Raymond. “I was inspired by hip hop culture—both the clothes they were wearing and the way they were wearing them.” Both studied fashion and travelled extensively (Emeric’s dad is a UN diplomat), grabbing pieces for each other as they went. “We realized we had the exact same taste,” says Emeric. In 2013 they launched 3.Paradis, which specializes in minimalistic outerwear with meticulous finishing details in leather or fur, all with one supercool caveat: “We don’t believe much in men’s clothes or women’s clothes, especially nowadays,” says Emeric. Their men’s show featured women models and included a wide range of cultural diversity too. “Fashion belongs to everybody.”

ASK THE EXPERTS:
Suzanne Timmins, What are your thoughts on the fashion calendar—and the fact that more designers have decided to not follow it? “Recent changes in the fashion calendar were inevitable—as an industry, we continually need to respond to evolutions in technology and how that changes the customer’s relationship with fashion retail. The consumer is driving the demand and will ultimately be the deciding force in settling ‘the great calendar debate’.”

Richard Simons, What strategies would you recommend for expanding into the U.S.?  “I travel to New York several times a month, and it’s one of the most competitive market places in the world. My strategy for an emerging designer would really be to wait; wait for an opportunity, wait for the U.S. to approach you. Again, working with the right people will definitely assist in achieving your goals and achieving success.”

Natasha Koifman, How will the Canadian fashion industry evolve  5 years from now?  “We have an incredible ambassador in Sophie Gregoire Trudeau who, working with Jessica Mulroney, wears Canadian fashion proudly. With luxury retailers entering our market and seeking out Canadian designers and brands, I see the next 5 years being significant not only for driving awareness of the amazing talent we have here in Canada, but introducing that talent to international consumers.” 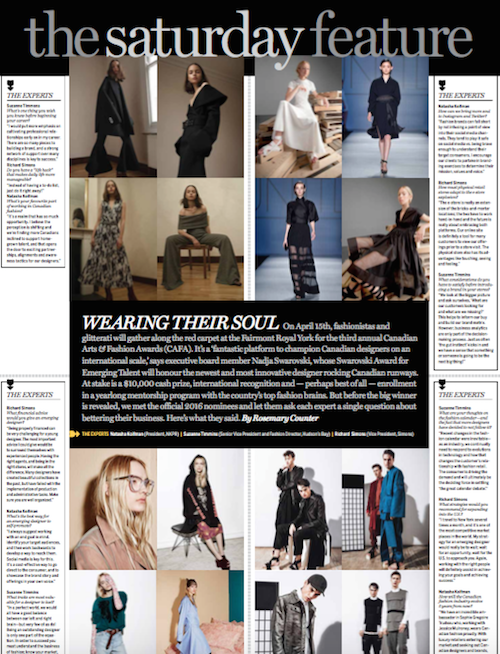