That old collector’s edition cottage board game may be worth a buck or two. Or $1,000

It’s a familiar cottage fantasy: Your ample collection of hand-me-down furniture and mismatched flatware is, as you’ve suspected all along, not trash but treasure! An old painting is a Van Gogh, a garage-sale armoire is a Chippendale, and—maybe, just maybe—your vintage Depression-era Monopoly game might be your fast track to retirement.

It’s very rare, but certainly possible, says John Engel, the Alberta-based owner of Boardgames.ca, Canada’s largest online game store. “Games of value show up in all sorts of places, and cottages are one of them. If you’ve had your cottage for a while, if every time someone gives you a game you take it there and maybe never even play it, it’s possible.

“I have a friend with a cabin on the lake,” he says. “He found an unusual old game, a massive trivia game. Even old and used, we looked it up and it was worth over $50.”

This disappoints me greatly; I was hoping he’d say millions, and I’m not the only one. At L.A. Mood Comics & Games in London, Ont., collector Jeff Temple sees this often: “People will come in and say, ‘I’ve got a first-edition Risk from 1961. How much will you give me for it?’”

Unfortunately, the answer is not much, since millions of copies of Risk— and Monopoly, Life, and Clue—were produced in the twentieth century. Even a mint condition 1930s Monopoly is unlikely to be worth more than $100.

Still, there are exceptions. If you’re hoarding a limited-edition Star Wars game called “The Queen’s Gambit,” you’re $300 richer than you thought. Ditto for a rare version of Risk: Black Ops, listed for $650 on Amazon. And if there’s a 3-D Settlers of Catan 10th Anniversary version sitting on your shelf, it’s worth more than $1,000.

Cross your fingers and check the value of your board games on eBay or boardgamegeek.com. You’re probably not flush with cash just yet, but take comfort that there’s value in your board games just the same. “Sometimes a game is worth the most by being played and enjoyed,” says Temple. Just try to keep the family competition in check.

SIGNS OF THE FIND:

Think you’ve got a golden ticket in that dusty board game? Here’s what to look for:

RARITY
“The less the product was printed, the more valuable the game is,” says Tammy Federico, owner of Crafts N’ Things Hobbies & Games in Seguin, Ont. Nexus Games produced only 500 War of the Ring Collector’s Edition games. “They’re worth up to $2,000 now,” says William Heaton, the co-owner of Interactivity Board Games in Victoria, BC.

CONDITION
“Mint condition is great, but shrink-wrapped is even better,” says Heaton. The value of the game goes down if the box is torn or stained, or if there are missing cards or pieces.

NOSTALGIA
“Watch for anything with characters from movies or comic books,” says Federico. Superheroes and cowboys, from the ’40s to the ’60s, such as a vintage Parker Brothers’ Superman game, are often sought by memorabilia collectors. 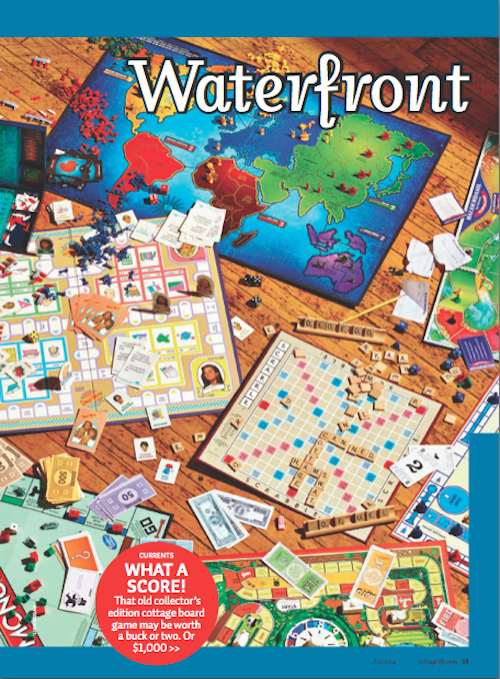 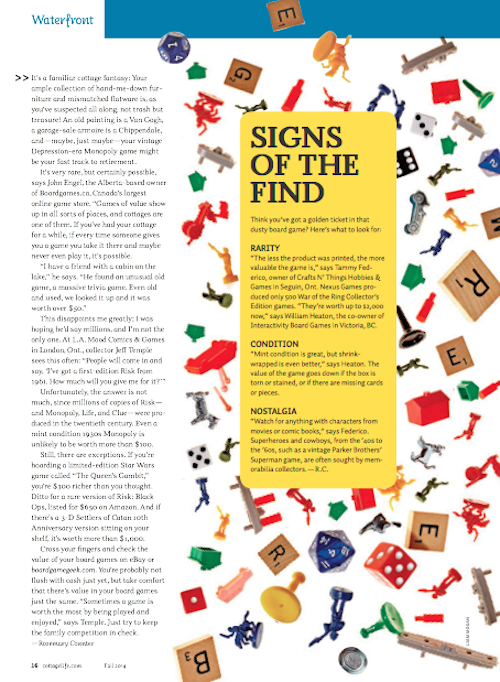