What’s in a number?

Whether it’s one or 1,000, is your tally of past partners anyone’s business?

Not your phone number, your sex number. The number of partners you’ve racked up over the years—decade-long husbands and one-night stands alike. And no lying, except maybe a little bit.

Should you be of the Pinocchio persuasion, there’s the so-called “perfect 10.” According to 10,000 members of the dating website seekingarrangement.com, when it comes to numbering ex-lovers, 10 is the sweet spot: Not too much to scare off your hookup, not too few that you might pass for Amish.

In the latter category are a few choice — and notably pervy — male celebs: Hugh Hefner has more than 1,000, Mick Jagger has topped 4,000 and Warren Beatty has reportedly racked up 12,755, “give or take,” according to a biography. But who’s counting?

For the rest of us, most studies put the number of sexual partners for Canadians—higher than the U.S., France and Italy — at around 23 for men, 10 for women. A mysterious mathematical discrepancy here, perhaps? Or, more likely, we’re all lying about getting laid.

One such admitted liar is a 29-year-old I’ll call Kate. “I don’t think I’ve been honest with a male since my number was under 20,” she confesses, her number more than double that now.

“I’ve been sexually active for 13 years with only one long-term relationship,” she says. “I don’t feel my number’s that bad, but if I could erase a few, of course!”

Kate’s dudes aren’t so honest either. “All men lie about their numbers, I’m100% sure of that,” she says, recalling one fellow who boasted of 100 partners but was clearly inexperienced in the bedroom.

“People lie to protect themselves,” says Dr. David McKenzie, a couples and sex therapist in Vancouver. “There’s something in the culture that expects men to be more experienced.”

So should newbie men and veteran women tell little white lies? “No, not at all. It’s better to not share than lie because a lie will eventually come out,” McKenzie says.

Curiosity is natural and legitimate, he says, but your partner’s past behaviour is “just one variable of many in the relationship.”

To nosy nellies, McKenzie has this advice: “Just say, ‘I don’t think it’s helpful for this relationship to dwell on my old relationships.’”

And then, once your relationship is solid and strong, ex talk will move from never to whatever, and one measly little (or maybe not-so-little) number won’t feel so daunting to disclose.

“With good communication and regular reassurance, a number can be overcome fairly easily,” he says. 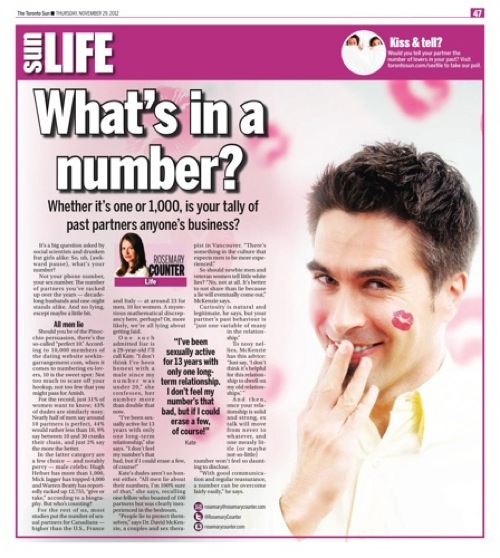