“Everything I said before about no honeymoons was a damned lie,” I hear

At least for now, said my new husband-to-be, a honeymoon was completely off the table. There was too much to do, not enough money to do it with, no time and definitely no extra vacation days. Clearly I took this as a personal challenge.

Since I’d long outsourced the dinner to a caterer and decorations to my girlfriends, why couldn’t I skip the meticulous task of travel planning—the last bullet on the to-do list, but the first to go on the chopping block—and outsource this to someone who knows better? And why not on the sly? How hard can swinging a secret honeymoon possibly be?

Pretty hard, as it turns out. In fact, Theresa Sylvestre, honeymoon specialist with Kensington Tours, rarely sees a flawless honeymoon surprise. “Once in a while, I have men who’ve been tasked to plan the honeymoon,” she says. Women almost never even try. “Often they’re already planning the wedding and they just don’t have time,” says Sylvestre. Too many exhausted couples will go online, book randomly and hope for the best. “Don’t do this. If you value your marriage, don’t do it!”

My own brand of Honeymoon Roulette, however, brings its own risks. My type-A partner likes planning and schedules; hates secrets and surprises. He mentally plans his days in advance and doesn’t appreciate wrenches in the plan (that’s me!). I’m hoping for pleasant surprise, not heart-attack shock, I tell Sylvestre.

If and when you dare a vacation surprise, knowing your partner is the first step. “I always start out by asking about your significant other,” she says. Think about your travel style and the trips you’ve already loved, but remember your post-wedding-selves might have different priorities. “You’ll probably want a good mixture of alone time, adults-only space, and room to relax,” she says. At the same time, however, “when people think honeymoon, they think bucket list.”

Clarification: His bucket list, she means, not mine. Ideally it’s on both your lists, but if you’re a travel mis-match like many are, the surprised party takes priority. “You’ve gotta know they’re gonna like the locale,” says Sylvestre. Unfortunately for me, now’s not the time to ride the Staten Island Ferry à la Working Girl.

“If you could go anywhere in the world, where would you go?” I not-so-subtly work into conversation in the weeks leading up the wedding. He dreams of African safaris, climbing Machu Picchu, and plates of pasta in Italy. But it’s an off-hand comment during a Game of Thrones re-run that ultimately piques my ears. “Wouldn’t it be cool to see King’s Landing?” he asked. (“Everything I said before about no honeymoons was a damned lie,” I hear.)

The winner is Dubrovnik, the Croatian city where HBO films his favourite show, and we’re moving right along. “Step two is to find out if you need Visas or anything,” she explains, which I won’t for Croatia. Sneaking an updated round of vaccination shots, for example, would be far trickier (and illegal?) task. Ditto for updating a passport, so check that now. “Your passports need to be valid for at least six months. There’s be nothing worse than frantically realizing its expired. That’s a bad surprise,” says Sylvestre.

Also in the worst-case-scenario pile is your choice of dates, and scheduling your romantic getaway atop your partner’s busiest workweek is a recipe for resentful disaster. To avoid this, reach out to someone who knows better. “An assistant or receptionist, for example, usually knows everything happening at the workplace,” suggests Sylvestre. Then run your chosen dates by your partner’s immediate boss for a thumbs-up even the most dedicated workaholic cannot deny.

You’ll probably be eating up some vacation days, so make sure there’s enough without gobbling every last one.

Now, the fun part: With flights and hotels booked—on a personal, not joint account, of course—and mounting excitement that I cannot share, staying zipped isn’t easy. I blurt the secrets to friends, to my parents, to his parents, to my orthodontist. Though I desperately want to, telling him is not so easy. I have a dramatic fantasy in my head: Him out the door en route to work, my sassy retort: “You’re not going to work today” as I pull a packed suitcase from the closet. We jump into a waiting car, in love like never before, and he’s clueless—plus uncharacteristically open-minded and agreeable—until the plane lands on Croatian soil.

Nice try, says Sylvestre. Surprises are good, but couples do better to surprise each other with some notice. “Everyone likes a few days to wrap things up, get new shoes or a haircut,” she says. It also leaves space for last-minute personal requests—can we hop onto a Game of Thrones walking tour, for example? We sure can—and anything extra that you hadn’t thought of that your partner might like to do. There’s also a little thing called anticipation, which of course makes every trip a little better.

So a week to the hour before our plane takes off, just when he least expects it, I announce I have a secret. “You’re not pregnant, are you?” he asks, too serious, which makes my surprise all the sweeter. I take a wrapped gift from its hiding place: two guidebooks to Croatia, plus the printed itinerary. He takes a solid ten minutes to accept this is happening, has already happened, all beneath his nose. “Are you kidding me?!”

I’m not, and so my surprise honeymoon is a success, and I’m not pregnant to boot! He’s thrilled, I feel like a sneaky genius, and it’s good to know after all these years, I can still surprise him. That said, I tell him, the next time someone is kidnapped around here, it had better be me. And it better be on the Staten Island Ferry. 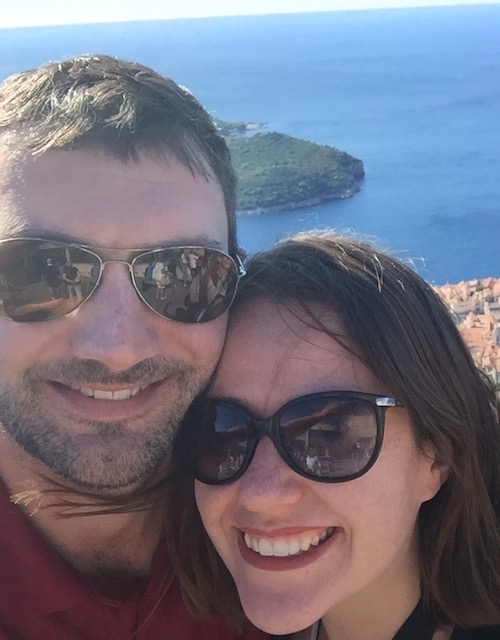