Who is Babe Walker? Does it matter?

What is a white girl problem? A quick sampling: “Pets are hard to photograph.” “There are no Royal Weddings in 2012.” “I hate that I’ll never get to be on Oprah.” “They just tried to kick me out of the gym for smoking on the treadmill.” You get the idea. They’re white girl problems, and Babe Walker has them all.

Urban socialite Babe Walker – maybe a pseudonym, maybe not – is a carefully calculated e-persona who may or may not be real. Spend all morning Googling “Who is Babe Walker?” and you’ll come up pretty empty and also miss The View (white girl problem). But her more than 600,000 Twitter followers couldn’t care less; they hang on every vacuous, racist, petty predicament that fills her leisurely days. Now that she’s an Internet star, it’s only logical that Babe write her memoir. And now you’re all caught up.

At the start of White Girl Problems, poor Babe has landed where chic troubled white girls often do: shopping rehab at the celebrity-saturated Cirque Lodge in Utah. After blowing more than $240,000 in one afternoon at Barney’s, not to mention the cocaine in the limo en route, Babe must reminisce over how she got there and “what White Girl Problems really are.” (Curse words, of which there are many, have been removed; Babe also has a white girl problem with expletives.)

Babe’s mom is MIA, so her entertainment lawyer father – explaining why Elizabeth Taylor and Marilyn Manson are at Babe’s birthday party – raises her with the help of some crazy characters. Among them is Babe’s grandmother (who considers the title an “ageist slur” and instead goes by “Tai Tai”), considers Babe an “adorable accessory,” but gives quality life advice: “Don’t go to bed with a full face of makeup on, unless you think you might die in your sleep.” Filling the motherhood role is Mabinty, a Jamaican baby nurse with some particularly offensive colloquialisms: “Yun too young to be stealin’ from mi stash.”

In the friend camp, Babe and her bestie – a.k.a. Bingey and Purgey – are a perfect match, even if logically they’re “too pretty to be friends.” And since every white girl needs a gay BFF, Babe has the hunky Roman, whom she tricks into taking her virginity (their safe word? “Tom Ford”). They’re all fashion-obsessed, obvi, and Babe even punctuates with pencil sketches of her designer wardrobe.

While teaching her dad a $200,000 lesson, Babe moves from the University of Southern California (“rich kid daycare”), to Brown (“never even heard of it”), to the Rhode Island School of Design (when an art gay calls her a hooker, Babe knows she’s home).

But when an art installation/arson situation lands her in the slammer, Babe is sent back to work for her father’s firm. Despite her efforts to be a lawyer – mostly refusing to answer the phone and repeatedly firing her superiors – Babe writes her resignation letter on day two: “I realize now that as a lawyer, it was my obligation to be under oath at all times. So when I told you your boots were cute, I perjured myself.”

Alas, everyone and everything is a ridiculous stereotype, but that’s kind of the whole point. Babe Walker – whoever she (or he?) is – uses a familiar trope to make a complete mockery of women, high society, reality entertainment, fashion, addiction and rehab. She’s also crude, mean and offensive – by all means a terrible woman you should rightfully hate. But maybe you also secretly love her? Classic white girl problem. 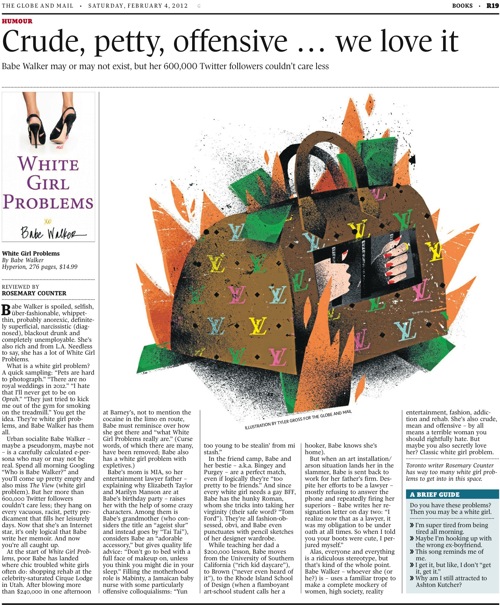