While island hopping aboard Air Tahiti, I took 10 flights in one week — yes, you heard me, 10 flights in one week. Through time zones and back again, and atop the 118 islands that form French Polynesia, this oft-grumpy (and sleepy, and hungry) traveller learned plane travel tips to survive flights big and small. Here’s how to stay healthy and happy in the air.

Leg 1: Toronto to Philadelphia, 6:30 a.m., 1 hour and 51 minutes
Good morning and hope you checked in yesterday! A brand new Expedia survey found, with 38% of the popular vote, that “streamlined check-in” is the biggest improvement in air travel of the past five years. Still, despite a plethora of online and mobile options, half of us (myself included) will forget and line up the old-fashioned way. We’ ll miss choice window seats, extra legroom and cheap up-grades: My cleverer travel companion, for example, scored a first-class bump to Philly for a bargain $50.

Leg 2: Philadelphia to Los Angeles, 10 a.m., 6 hours and 16 minutes
Don’t wanna land in sunny L.A. fighting a cough and cold? Good luck: A study from the University of Victoria found that after a five-hour flight, you are 113 times more likely to catch a cold than the general population. Blame recirculated air, proximity of passengers and lack of humidity for this germ-fest, but expert travellers pack antibacterial wipes to disinfect the danger zones: seats, tray tables and armrests, all of which are far germier than the toilet flush handle (usually considered the grossest of the gross), say experts from the Society of Microbiology. Now’s a great time to tuck a mini bottle of hand sanitizer into your purse or pocket.

Leg 3: Los Angeles to Tahiti, 3:30 p.m., 8 hours and 35 minutes
Maeva! (That’s “welcome” in Tahitian.) Expect a lei made of the traditional Tiare flower and a powder-blue sleep mask for snoozing. Jet lag was once considered a state of mind, but scientists at the National Sleep Foundation — and everyone’s who’s ever taken the red-eye — knows that jet lag is very real, caused by imbalance in the body’s natural clock or “circadian rhythms.” For an easier transition, experts recommend you do the time-zone math in advance and set your clock the moment you sit down on the plane. I’ll be landing in Tahiti six hours earlier than Toronto time — a “phase delay” in my circadian cycle — but I’ll otherwise be forgetting about Toronto time entirely. That means not stressing that it’s dinner- or bedtime at home, and ingesting coffee and alcohol on Tahiti-time only. That also means it’s perfect time for a Mai Tai.

Leg 4: Tahiti to Raiatea, French Polynesia, 7:45 a.m., 45 minutes
‘Ia oro na ‘oe! (Good morning.) Bright and early, and would you like something to drink en route to your island paradise? (Actually, since French Polynesia and Air Tahiti is mostly French-speaking, Puis-je vous vous offrir un verre?) Say “Oui,” as you’re probably dehydrated and that’s no way to land at the “Sacred Island” where historical kings from as far as New Zealand would gather for negotiations. Back up the air, aircraft humidity falls to about 20%, whereas your body prefers 40-70%, which is why your eyes and throat scratch. Remember coffee and tea are both diuretics, so every cup requires an eight-ounce glass of water on the side.

Leg 5: Raiatea to Bora Bora, 10:50 a.m., 20 minutes
There’s an undeniable pleasure in simultaneously reaching your altitude and beginning your descent — especially over shining turquoise waters of French Polynesia’s second-most famous spot — but not so much for your ears and sinuses. A 2004 study from Denmark found 14% of travellers suffer from “barotitis” (the technical term for middle ear pressure and pain). Candy and yawning are the usual suggestions, or a decongestant like Sudafed, but not when you’re already sitting on the tarmac. Savvy fliers pop a pill the night before.

Leg 6: Bora Bora to Rangiroa, 11:40 a.m., 1 hour and 15 minutes
When you’re island-hopping like I am, you don’t want to be the sad victim of two things: death by shark attack at the 150-foot-deep “Infinite Lagoon,” and lost luggage. Don’t be the (former) owner of more than 20 million pieces of lost luggage per year by travelling carry-on. Especially in Tahiti, where I don’t need more than one dress and one swimsuit, minimalists breeze though crowded airports and skip baggage lineups altogether. Light-packers also skip luggage fees, but more carry-ons are slowing the boarding process. The happy medium? Ask about checking your bag for free at the gate. Most airlines will happily oblige. Don’t forget to say thanks! (Mauruuru!)

Leg 7: Rangiroa to Tikehau, 8:30 a.m., 20 minutes
Even on the shortest of flights, cosy clothing isn’t just comfortable — it’s healthy. Tight clothes and high heels can lead to deep vein thrombosis, a blood clot that can quickly turn deadly. A terrifying thought, but rest assured that studies show the risk is only about 1 in almost 5,000 flights. So while flight attendants don colourful Hawaiian shirts (and flowers in their hair!), you should choose stretchy pants and a layered hoodie.

Leg 8: Tikehau to Tahiti, 1:50 p.m., 55 minutes
It’s time to leave Tikehau, where Jacques Cousteau discovered such a variety of fish that he selected the spot for his study, and hop-skip-jump back to Tahiti proper. But short flights like this one, do you even need to sit? The U.K.’s Ryanair CEO says on his “bus with wings,” standing cabins could arrive within 5 years, bringing a 21% increase in passenger capacity and a 44% drop in ticket prices. Until then, experts suggest every hour in the air needs a stroll up and down the aisle so as not to throw that aforementioned clot.

Leg 9: Tahiti to Los Angeles, 11:50 p.m., 8 hours and 10 minutes
Faced with yet another X-ray scanner, I’m tempted to use this excuse to stay forever. But am I right to worry about radiation at the airport? Not really, says a new study from the American Association of Physicists in Medicine. A standard full-body scan blasts 11.1 nanosievers of radiation, about 1/10,000th of the radiation you’re exposed to annually just by living on Earth, and you’d need 22,500 scans in a year before you reached the standard safety max. A better worry while waiting at security? Bacterial or fungal infections of the feet, which run rampant since shoe-removing measures were implicated. Be smart, wear socks. They go fabulously with your lei.

Leg 10: Los Angeles to Toronto, 3:30 p.m., 4 hours and 45 minutes
Living up to the reputation that proceeds it, airplane food as awful might not be entirely its fault. Pressurized air cabins both dry out food and numb your tastebuds by as much as 30%, an unfortunate combo that makes satiation at 30,000 feet a very difficult task. So eat for pleasure two to three hours before boarding, then skip heavy or hard to digest foods in favour of salads, raw fruits or veggies, and lean proteins (that little bag of almonds is a great choice). Fasting en route, found a 2008 study out of Boston, also helps regulate your circadian clock and fight jet lag upon arrival. I get takeout when I’m home, cause after 10 flights in one week, I deserve it. So eat up and goodnight, or taoto maitai! 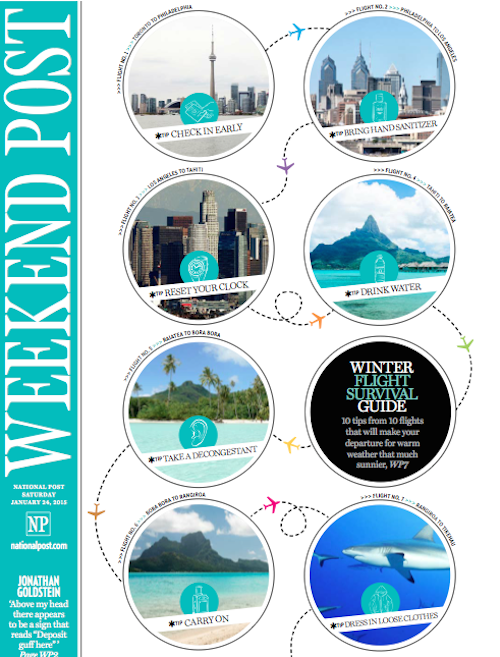 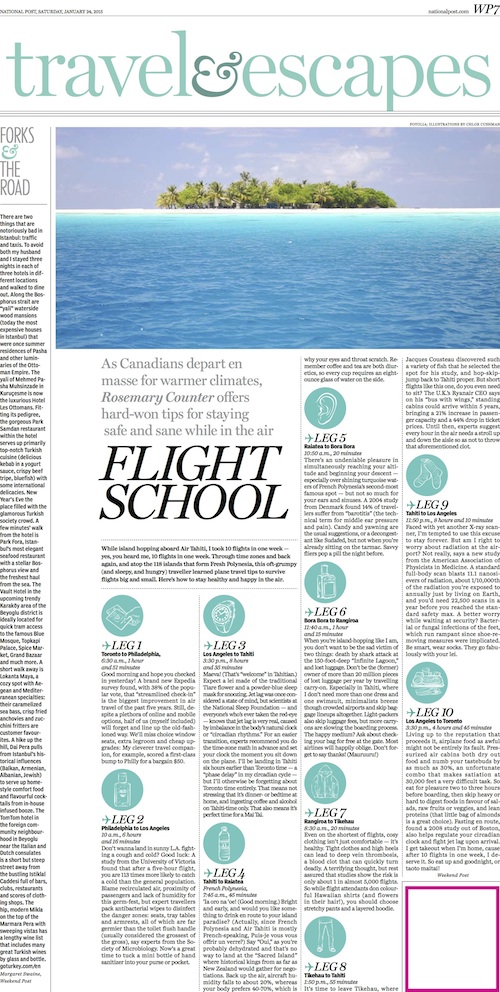