A Day on the Farm

Not everyone has the space (or the green thumb) to grow a garden full of summer produce, but luckily that fresh-from-the-earth taste is just a short trip away

Brooks Farms, Mount Albert
(1 hour from Toronto)
In business for 150 years, Brooks Farms serves up more than just tasty, pickable produce (count on gooseberries and currants through August, and raspberries and strawberries until fall). They’ve also got a whole Barnyard Playland full of stuff for rambunctious kids. Enjoy a train ride around the property, climb aboard a black pumpkin pirate ship or get lost in the corn maze – and don’t forget about the zip line and gigantic jumping pillow. Animal lovers must check out Brooks’ barnyard friends, including a coop of singing chickens. 122 Ashworth Road, 905-473-3246; brooksfarms.com

Pingle’s Farm Market, Hampton
(1 hour from Toronto)
Little adventurers shouldn’t miss the late-August opening day of Pingle’s massive eight-acre corn maze. The party is Canada-themed this year, so wear your brightest reds – if only to avoid getting lost! (We’re just kidding; the maze takes about an hour.) Try tomatoes and cucumbers from the market, then pick-your-own apples and fall raspberries when season starts at the beginning of September. 1805 Taunton Road East, 905-725-6089; pinglesfarmmarket.com

Whittamore’s Farm, Markham
(45 min from Toronto)
August is the best month for pick-your-own options at Whittamore’s Farm: Besides fall strawberries and raspberries, you can fill your basket with tomatoes, peppers, eggplant, cantaloupe, watermelons and beans. Little ones can then visit the Fun Farm Yard (open daily until September 13), where they can climb up onto a 1950s tractor, try the wooden milking cow and play in the two-storey tree fort. 8100 Steeles Ave East, 905-294-3275; whittamoresfarm.com

Downey’s Farm, Caledon
(45 min from Toronto)
At Downey’s, just north of Brampton, farmers-in-training (aged five to 10) can enroll in Summer Farmer Camp – five days’ worth of lessons in farming life and caring for crops and animals. Day visitors can play on the pedal-cart track, 40-foot slide and new jumping pillows, or pick raspberries and strawberries or grab a tasty treat at the bakery. Adults can stock up on bottles of award-winning vino from the winery. 13682 Heart Lake Road, 905-838-2990, downeysfarm.com 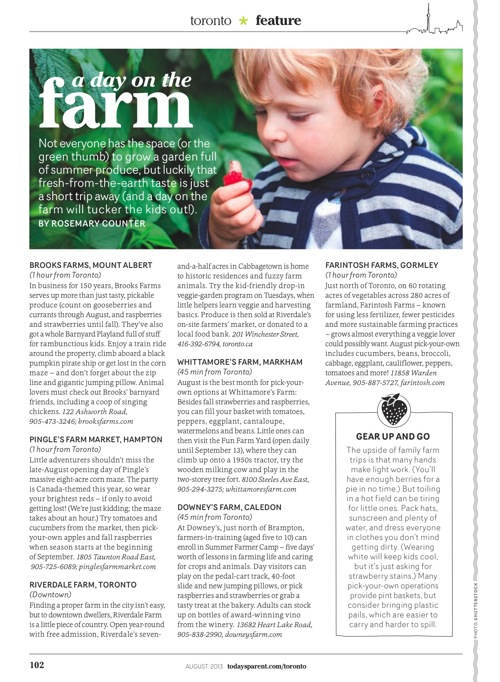