A feast fit for dragon slayers

As hordes of viewers tune in to HBO’s Game of Thrones to see what’s up with those dragons, fantasy geeks are kicking their fandom up a notch. The much-anticipated April 1 premiere of the show’s second season has hardcore fans preparing viewing parties with games, costumes and even medieval grub.

As anyone who has read George R.R. Martin’s A Song of Ice and Fire series knows, lavish descriptions of lamprey pies and blood sausage are a signature of the books. Last year, as hype for the show’s premiere, HBO’s marketing team sent a Game of Thrones food truck into the streets of New York City and Los Angeles. Tom Colicchio of Top Chef fame created the menu, which included black seafood stew with dragon peppers and pickled eggs with horseradish.

The food in the book is a storytelling tool with a literary purpose, according to Alan Kistler, author of The Unofficial Game of Thrones Cookbook. “If something’s bitter, it’s because someone’s bitter,” he says. While careful to avoid spoilers, Kistler’s recipes include everything from wild boar ribs to marinated beef heart.

If you’re already out of your culinary comfort zone, know that this is the toned-down version. “We’ve made some substitutions,” says Kistler. “We replaced stallion heart with beef heart—because it’s too much fun not to have a heart dish.”

Montreal’s Niki Hyde, a 25-year-old food writer, has been studying medieval recipes for weeks. She’ll likely skip the heart, but will whip up some Middle Eastern fowl dishes with lemon cakes for dessert. “There will be six or eight people, but hard-core Game of Thrones fans only,” she says. Hyde will don main character Daenerys’s trademark braids, if she can master them first, and her husky-mix dog is attending as a dire wolf.

Although up to date on food trends by profession, Hyde is drawn to the simplicity of medieval fare. “There are no foams or other molecular gastro-nonsense,” she explains. “We have a tendency to over-flavour things now, as if a dish with more flavours is somehow better.”

Authors Chelsea Monroe-Cassel and Sariann Lehrer of Inn at the Crossroads, a popular Game of Thrones food blog-turned-book, source recipes from Martha Stewart to Chaucer. “We try to do an old-fashioned and modern version,” says Monroe-Cassel, citing the ever-popular pork pie. “Medieval pork pie is almost sweet, whereas the modern palate prefers the savoury.”

Food in the book’s Seven Kingdoms of Westeros loosely mirrors medieval European regional fare. “In the frozen north, they’ll have hearty beef stews to keep warm, whereas in warm and sunny settings, which are sort of Arabic or North African, they serve fresh fruit and yogourt,” says Monroe-Cassel.

Monroe-Cassel and her co-author are based in Boston, where fantasy-worthy food isn’t always easy to find. They’re still working on ingredients for the newest book, which includes alligator and camel meat, and they will have pigeons shipped in from a butcher in New York City. “We didn’t ask any questions about the providence of the pigeon,” she laughs. “Who knows?”

But how gross is too gross? “I passed on the calf’s brains,” Monroe-Cassel confesses, “but Sariann made them and said they were delicious.” Her partner is on the lookout for lamprey, which are a royal delicacy: Queen Elizabeth II’s coronation pie reportedly featured the meaty bloodsuckers in 1953. Party thrower Hyde draws the line at fermented mare’s milk. “I don’t care if a shirtless and gleaming Khal Drogo was offering it to me, that’s never going to happen.”

Inn at the Crossroads, which is about to celebrate its one-year anniversary, even includes a “plan a party” page with recipes from simple (leek soup) to bold (potted hare). But whatever you decide on, one recipe not to miss, according to both Monroe-Cassel and Kistler, are the lemon cakes: a mixture of flour, sugar, milk, butter and eggs with the zest of two lemons. Slow cook in open hearth, or your oven. Enjoy immediately, costumes optional. 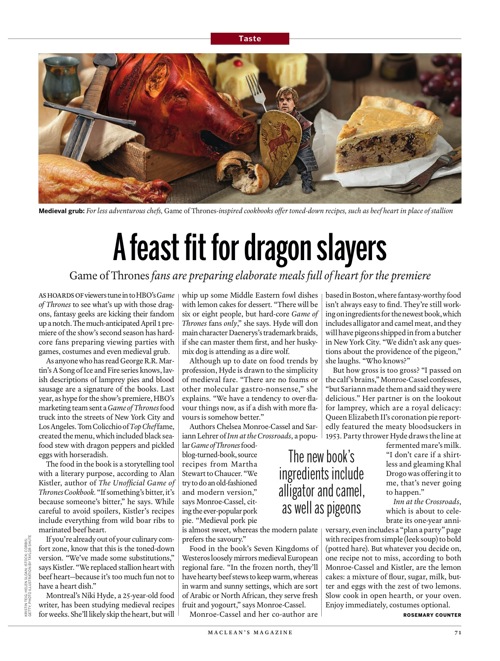