Can a friendship survive–or even thrive–when sex comes into the picture?

As yet another reincarnation of the old When-Harry-Met-Sally motif hits the big screen — this time it’s Friends With Benefits, not to be confused with last season’s No Strings Attached — it seems we still have no answers when it comes to boinking your friends: Can such a simple set-up possibly work? Won’t it ruin the friendship? And what if you fall in love?

Firstly, full confession: I haven’t seen any of these, as they’re bad for the brain. I’m going to assume, however, that despite their best efforts, and after triumphing over a series of comedic obstacles, Justin Timberlake and Mila Kunis will most certainly fall in love and live happily ever after.

In real life, things are more complicated. Take my pal Allison — not her real name, she’d kill me — who’s seeing her best friend Adam. “We sleep together but don’t talk about it. And it’s a secret from all our friends, which only makes it hotter,” she adds.

Lucky for Allison, casual sex is more acceptable than ever before. But things weren’t always so awesome: there’s an oft-cited 1989 study where almost all college men said yes, please, to a random sexual encounter, while not a single female agreed. New research disagrees: a University of Michigan study suggests women are just as likely to say yes under the right circumstances; a Minnesota survey found casual sex had no negative impacts on self-esteem or emotional well-being; and Iowa researchers found relationships that begin as hook-ups can be just as rewarding as taking it slow.

“The polar opposite of a one-night-stand, friends with benefits goes backwards–you’re already friends, so maybe let’s try sex too,” says Peter Jonason, social psychologist at the University of West Alabama. Jonason’s done extensive research on modern mating and booty calls, but it’s friends with benefits that he’s studying next.

Sounds like a good relationship, I say, and that’s just what Jonason is out to prove next. “Friends with benefits seems to provide a trial run. Like, I’m not really sure, let’s see if we work out sexually, and if not, we weren’t really committed in the first place. It’s a manifestation of commitment phobia.”

And though I hate to stereotype here, it’s often women–whether because of neurochemistry or romantic comedies–who find themselves wanting more. Though she believes friends with benefits can be perfectly healthy and legitimate, registered therapist Anna Toth sees a lot of the former. “Women are often hoping for something more committed and long-term, and then they’re hurt when it doesn’t happen,” she says.

Which is just what’s happening with my friend Allison. Adam’s been away for a few months, and she can’t stop thinking about him. “I’m madly in love with him. Either we’ll be together, or that will be the end of the friendship,” she says. It’s not quite so simple to be wrapped up in 90 minutes, but if the experts are right, there could just be hope for her Hollywood ending after all. 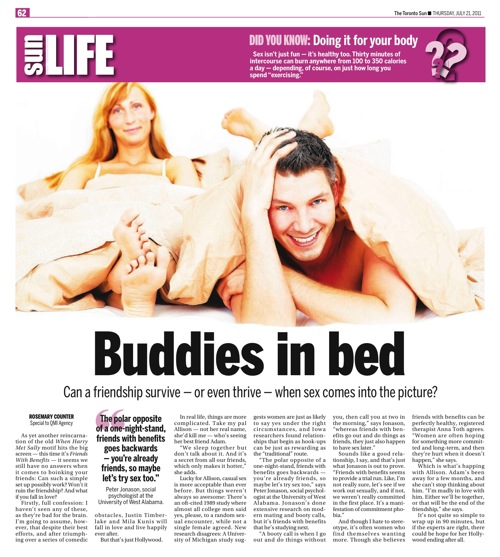