Or, the only time I mostly successfully kept a secret

So a few months ago, having already watched the HBO show Girls many boozy times, this girl-plus was sent south for power hour in New York City, aka a visit to the set. On a sad writerly budget, I’d be crashing on my friend’s Brooklyn floor—quite fittingly, I figured, both thematically and metaphorically.

The whole thing was top secret—mostly, I bragged repeatedly on the sly to anyone who mentioned the show—and for a few months, I signed my soul to HBO to keep any all spoiler alerts to myself. That’s right, girls, I know things that you don’t know.

We (myself and three other journos, all men I should mention with a disapproving look in my eye) met at the HBO headquarters at midnight. Wasn’t sure what to wear, so I wore what I always wear when confused and in need of confidence: a power-red dress, which I half-believe has superpowers. Also wasn’t sure where we were going (see: top secret), but was eager to go wherever Lena Dunham was, in this case an office building-turned-fabulous party in Chelsea.

The rest is in the story, which is in Maclean’s right now, but also right here for your reading pleasure slash feminist critique. Big thanks to my editors for trusting me not to faint, Lena Dunham’s momentary insomnia that turned her nap into my interview, hostess with the mostess Elaisha Stokes, and everyone at HBO for the diet cokes. Damn they were good. 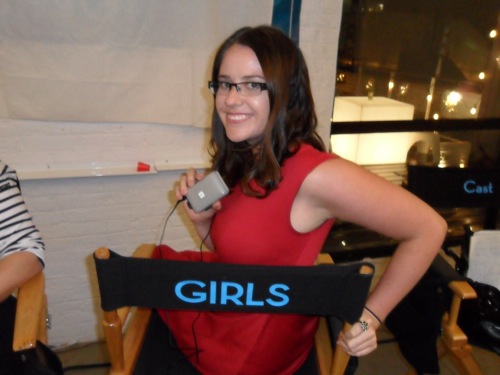