On set in New York, creator Lena Dunham talks about the perils of self-referential comedy

It’s after midnight in New York, in an alley in Chelsea, where homeless men sleep on window ledges and garbage trucks collect trash by moonlight. In a brick office building, up a rickety elevator to the eighth floor, a hundred hipsters, every one styled with ironic hats and oversized scarves and stilettos, laugh and mingle in low lighting. Beer bottles and half-eaten pizzas are strewn on every table, though no one eats or drinks the props.

“Rolling, rolling!” calls a cameraman, and in struts Marnie, played by the impossibly beautiful Allison Williams, in a peacock-blue dress. Hunched behind the camera, in sensible heels and a too-short lace dress that reveals the Spanx beneath it, is 26-year-old Lena Dunham, creator, writer, producer and sometimes-director of the HBO comedy, Girls. Once she’s happy with the party scene, Dunham calls “cut,” and releases the extras for lunch—at 1 a.m. Then she comes over to apologize.

“We’re shooting a boring establishment shot, but we’ll try to keep it spicy for you,” she jokes, bursting with friendly energy even though she doesn’t drink coffee. “I love nights, I thrive on them. My natural rhythm would be sleeping from 4 a.m. to noon.”

Sleeping till noon—like begging your parents for rent money, letting your friend give you a freestyle tattoo, or eating cupcakes in your bathtub—is part of Dunham’s love-her-or-hate-her persona as a wandering, spoiled millennial. “I may be the voice of my generation,” says her character, an aspiring writer based not so loosely on Dunham herself, or some version of a former self, in the show’s pilot. “Or at least a voice of a generation.”

Even before its premiere last April, there was already buzz. “I was surprised how early it happened—three weeks before the show was on the air,” says co-executive producer Ilene Landress, self-described “oldest girl on Girls.” After 15 years at HBO, and producing credits on The Sopranos and Mildred Pierce, Landress has seen every version of hype—but nothing like this.

There were inevitable accusations Girls wasn’t new at all, that it was just another Sex and the City knock-off. “Other than they’re four women and they’re in New York, I don’t see it,” says Landress. The criticism was quaint, compared to a doctored show poster that circulated online with “Nepotism” in place of the show’s title. Instead of the four girls’ names, it described their lineage: artist Laurie Simmons’s daughter (Dunham as Hannah), NBC anchor Brian Williams’ daughter (Williams as Marnie), playwright David Mamet’s daughter (Zosia Mamet as Shoshanna), and Bad Company drummer Simon Kirke’s daughter (Jemima Kirke as Jessa).

Dunham’s fast success, to some, was too easy. After a private liberal-arts education (her school, St. Ann’s in Brooklyn Heights, doesn’t grade students and has been described as “an artsy Hogwarts”) and an undergraduate degree in creative writing at Oberlin College, Dunham made her first feature film, 2010’s indie comedy Tiny Furniture, about “postgraduate delirium.” Filmed at her parents’ apartment starring her family and friends, the film uses the same raw and sometimes shocking tone of Girls. (In one scene, while Dunham’s character has unprotected sex, she asks, “You don’t have AIDS, do you?”) In the film, Girls actor Alex Karpovsky appears as a writer shopping a show to HBO. In a case of life imitating art, the film attracted the attention of hotshot L.A. producer Judd Apatow, who took Dunham under his wing. Six months later, HBO gave it the green light.

Allegations of privilege were quickly compounded when the show—set in Brooklyn, where the population is 42 per cent white—aired with almost no people of colour, even in the background. Dunham insisted she was writing from her own “half-Jew, half-WASP” experience and wanted to avoid tokenism. Girls writer Lesley Arfin wasn’t so eloquent: “What really bothered me most about [the movie] Precious was that there was no representation of ME,” she tweeted in April.

With almost 500,000 Twitter followers, Dunham—who has been accused of “casual racism” by the New York City-based blog Feministing—compounded problems when she tweeted a pic of herself in a scarf worn like a hijab in August. Dunham promptly apologized for the transgression.

Comedy is always hit-or-miss, the best kind walking a fine line between shock and decency, but in the age of social media, it can be especially polarizing. “Sometimes it feels good, like you’re unified with people similar to you,” says Dunham of her impulsive—and compulsive—media-sharing habits. “But sometimes it’s a huge misfire and I want to shut off every Gmail account and stop twittering and pretend I never met Instagram.”

Good and bad press, about the show itself and the zeitgeist, can be overwhelming. “Lots of very smart people told me not to read the press—no offence!—especially the comments,” says Williams, who plays Hannah’s uptight roommate Marnie, and has slipped into very un-Marnie-like Uggs. She knows the show asks big questions, but insists the show is “familiar-feeling and grounded in the real world.”

Dunham, as a writer, is compelled to stay authentic, but as a producer, she must understand and navigate her audience’s response. “But that’s what it is to be a writer,” says Jenni Konner, 41, a writer (one of eight) and executive producer on Girls. She feels some criticism was fair—including the race complaints. “People weren’t wrong to say we weren’t portraying all of New York,” says Konner, promising season two makes a better effort.

Other criticism wasn’t so constructive. “I object when people are rude about Lena showing her body,” Konner says. Dunham seems to love nudity, especially the un-airbrushed kind—making Girls a hit with older male viewers hanging around after Game of Thrones on Sunday nights. At last year’s Emmys, when Girls was nominated four times, Dunham appeared in a skit, naked on a toilet, eating a whole cake.

Sloppy chic is a popular shtick—30 Rock’s Liz Lemon, while gobbling a barbeque sandwich, shouts “I can have it all!”—but, like Tina Fey, Dunham’s television persona is just one role for a burgeoning media mogul with fingers in many pies. While riding high on her status as a prodigy, Dunham whipped up a book proposal for Not That Kind of Girl, an advice book of essays, including “Take my virginity (no really, take it)” and “My Internet boyfriend died (and so can yours).” The proposal sparked a bidding war, and was scooped up by Random House for a reported $3.7 million. (Fey got $5 million for her book.)

In mid-December Gawker acquired and leaked a copy of the 66-page proposal, which includes a chapter of reprinted emails to ex-boyfriends and a detailed list of Dunham’s food diary. Reaction was split into two camps: those thrilled for Dunham’s success and those disgusted that her undeserved celebrity had reached a new pinnacle.

“Even if you’re having a very successful moment in your career,” says Dunham on set, where filming will continue past 4 a.m., “there are still the same personal anxieties. You just have bigger opportunities in which to fail and humiliate yourself.”

But that’s a good problem to have for a writer who writes about herself, and don’t be surprised if a meta-version of Dunham’s book drama soon reappears on the screen. This, says Konner, is Dunham’s greatest gift as a writer. “She’ll go on a date, have a humiliating experience and, by the next day, is writing the comedy version.”

“Lena is a sponge, picking up things faster than anyone I’ve ever seen,” says Landress. “It electrifies her, passes through her, and she spits out these really interesting scripts.” The flip side of this, of course, is that too much glittery success could mean the end of Girls. “The more time she has to live her life, the better,” says Landress, who fights to keep her star in New York. “If she’s off living some weird Los Angeles life, I get a little skeptical.”

For Dunham, there’s nothing to do but keep extracting confessions from her life—no matter how blessed—and hope her audience somehow continues to relate to her. Because her success is contrary to the very platform she’s built it on, backlash is inevitable. Meanwhile, mounting hype demands realer and rawer material. So does Dunham worry about revealing so much that there’s nothing left? “All the time,” she admits, “but at the same time, I don’t know another way to work. So the same way I don’t worry about my tattoos sagging, I don’t worry about that either.” 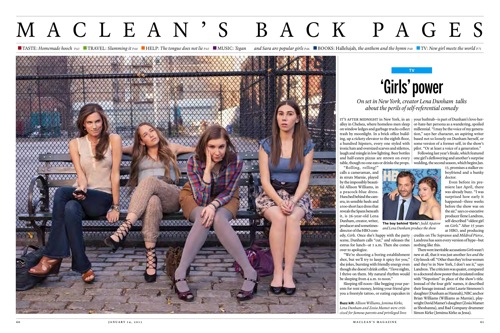 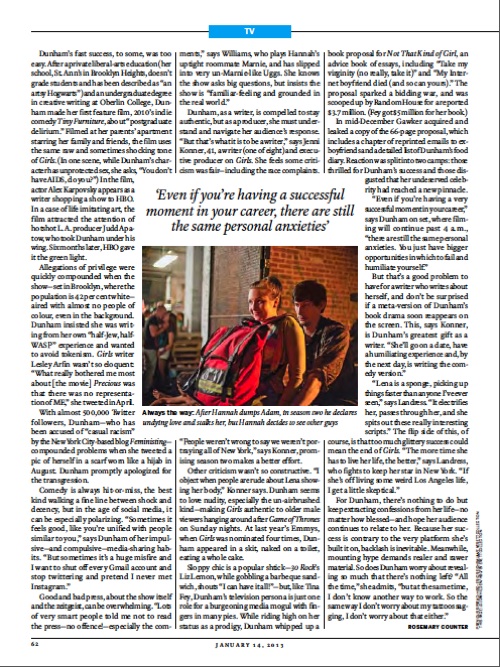