Plight of the bumbling Bee

Review: I Know I Am, But What Are You? by Samantha Bee

Move over, Letterman, and see ya, Seinfeld; Female comediennes have officially taken centre stage. We’ve all caught Fey fever. Silverman syndrome? Poehler pox? I could go all day – but, um, can Canada come too? Please?

Toronto-born actress turned Daily Show darling Samantha Bee says yes, and then promptly promises to be good. And she is good: I Know I Am, But What Are You? is a collection of cheeky essays – not a biography, despite what Heather Reisman would have you believe – reflecting on Bee’s childhood north of the border. If that sounds bland, prepare yourself: There are no descriptions of the Canadian wilderness here.

As such, a confused Bee becomes something of a walking contradiction. On one hand, the admitted “indoor kid” (she’s got an unfortunate combination of “the complexion of powder and the muscle tone of a pile of Flubber”) is a quiet Jesus freak whose report card reads, “Cries easily.” On the other, Bee’s favourite pastime is subjecting her Barbie dolls to X-rated role-play games: Old-timey sixties Barbie is a swinger with a smoker’s cough; Ken is “gay, obviously,” and Wonder Woman prefers the company of other ladies.

Her strict father doesn’t know Bee knows any of this, of course, and one of the book’s best moments is his mumbling explanation after someone calls Billie Jean King a carpet muncher. As if she has never lived it down, Bee perfectly captures the cringe-worthy ick factor turned permanent damage that only parents can provide by describing two doughnuts bumping up against each other.

Without implying that this directly caused her disastrous teen years, though it totally did, Bee is soon decked out in tight jeans, frosted eyeliner and feathered hair. At 13, “puberty excavated a wellspring of evil energy” in her that sparks the “white-hot wrath of a middle-class teenager.” She takes mystery pills from strangers in the hopes of free pizza, picks up a 30-year-old on the bus and goes to his basement apartment (again, free pizza) and is the accomplice to a series of thefts with her first boyfriend.

Like it’s just the next act, Bee’s personality is soon overhauled again. She has since held a series of jobs – frame-store lackey, blackjack card shark, penis clinic intake technician – and told a variety of hilarious tales with the dramatic flair (and suspicious implausibility) that exists only in retrospect. Contrastingly, she’s now a student living off campus as one-half of a pair of crazy old cat ladies who discuss American imperialism while they bleach their mustaches. The order’s all a little vague, but somewhere in here Bee meets her Canadian husband (she’s dressed as Sailor Moon, he’s Tuxedo Mask) and together they make it big in the Big Apple.

But how she does it is missing. If you’re waiting for a rags-to-riches story of Toronto girl gone golden in Hollywood (a personal favourite), it’s not here. How she goes from Sailor Moon to The Daily Show, and whether Jon Stewart is a jerk in real life are not here either. Even her Canadianness – for example, where’s the mansion her mom owns? What school did Bee go to? – is mysteriously absent, reduced to a few passing Canuck zingers (“Drugs are for losers. And Canadians”).

So yes, Canada can join the lady comedy fest, but there are rules, eh?: 1. Be too personal and yet completely impersonal at the same time. 2. Keep poop jokes to a minimum; that’s Sarah’s shtick. 3. Be totally hot, but make endless self-deprecating jokes about gross you are. 4. Hating feet and loving Star Wars are universal comedienne truths. And, finally and most important, 5. Be funny.

Bee is all the above, even if she does look just like serial killer Aileen Wuornos after a shower. 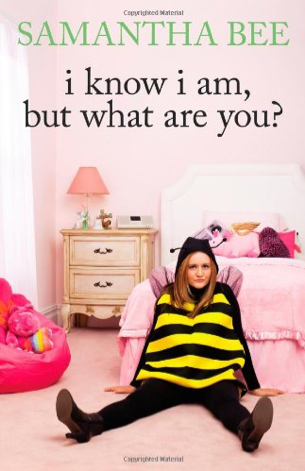