Ring in the New Year

Think New Year’s is just for overdressed grown-ups? Think again with these kid-friendly events, perfect for ushering in 2013. (Midnight bedtime is optional.)


New Year’s Eve at Blue Mountain
Worth the drive: Ski bunnies (or if you’re just looking for a special getaway to welcome 2013) should consider a mini-trip to Blue Mountain in Collingwood. They’ve got ski packages of all kinds, and the whole gang will enjoy the Family Celebration in the Huron Grand Ballroom. Buffet dinner, live entertainment (a strolling magician and jester, caricaturists and jugglers), plus fireworks over the Village Mill Pond, are included in the ticket price. And good news for moms and dads: The casual dress code means you can skip the fancy clothes. Cheers to that! Meal tickets are $75 for adults, $50 for kids six to 12, and children under six are free. 108 Jozo Weider Blvd, Collingwood. 705-445-0231; bluemountain.ca

Medieval Times! New Year’s Eve Show and balloon drop
A popular New Year’s Eve destination for families for 30 years, Medieval Times runs a special late-night event following their regular 6 p.m. show (which is also a good choice for little ones and tired parents). But the kid-friendly late show is extra special: Besides the usual – a tournament of knights on horseback, costumed wenches with ale or soda, and a four-course feast eaten with your fingers – expect party favours, sparkling juice (or champers for Mom and Dad) and a balloon drop at midnight. Night owls can even dance in the knight club (yes, you read that right) after the show. Tickets are $70 for adults and $40 for kids 12 and under. Exhibition Place, 10 Dufferin Street, Toronto. 1-866-543-9637; medievaltimes.com

Citytv New Year’s Bash at Nathan Phillips Square
Head to the heart of the city for Canada’s coolest New Year’s Eve celebration: the highly anticipated Citytv event in Nathan Phillips Square, now in its 29th year. Family-friendly, alcohol-free festivities kick off at 10 p.m. (An afternoon nap might be necessary for kiddos attending this event.) Hosted by your favourite Citytv personalities, including Tracy Moore and Dina Pugliese, the big night includes hit musical performers who are sure to entertain the thousands of on-site partygoers (with countless viewers watching the live show at home) until the clock strikes midnight. Free. 100 Queen Street West, Toronto. citytv.com

Ring in the New Year at Queen Victoria Park
The Niagara Parks Commission and ET Canada – plus upward of 40,000 excited partygoers – partner up for Canada’s largest live televised New Year’s Eve event. This year, Nelly Furtado, Hedley and Dragonette will be rocking out at this concert overlooking Niagara Falls. There are two fireworks show (at 9 p.m. and midnight), and food and beverage vendors to tempt your taste buds. Those who’d prefer to celebrate at home can watch ET’s Cheryl Hickey and Rick Campanelli live from the Falls, starting at 10 p.m. Free. www.niagaraparks.com/nye

Toronto Zoo’s 10th Annual New Year’s Eve Family Countdown
Get your tickets in advance to party with some wild new friends at the Tundra Trek or at the Americas and Australasia pavilions. Lively entertainment includes “That 60s Show” tribute band, a stage show featuring the cast of Kung Fu Panda, and the Majinx Magic Show. But, of course, the real stars are the crazy creatures and furry friends! Doors open at 5 p.m. and the fun goes until 8, when the zoo does its own special kids’ countdown to 2013. Don’t forget to dress warmly! Tickets are $20 for general admission, $12 for kids four to 12, and kids three and under get in free but still need a ticket. 2000 Meadowvale Road, Toronto. 416-392-5929; torontozoo.com

Howl’n Hikes Ring in the New Year at Bronte Creek
Since 2000, hundreds of nature lovers have flocked to Bronte Creek Provincial Park near Oakville for a guided Public Coyote Howl hike (times vary; check the schedule before you leave the house). The park naturalist will uncover some secrets about the coyote: Where do they live? Why do they howl? Will they respond if we howl like they do? Then, gather around the bonfire for the countdown to the new year (at a more kid-friendly 8:30 p.m.) and stay warm with a treat from the Park Store, serving hot food and drinks until 9:30 p.m. $16 per car.1219 Burloak Drive, Oakville. 905-827-6911; brontecreek.org 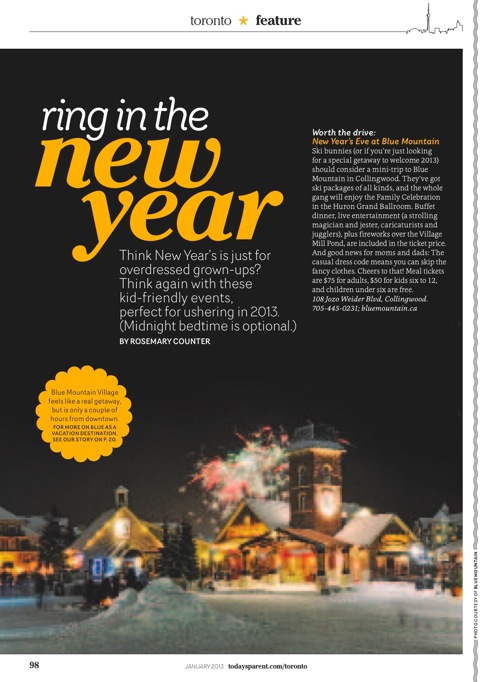 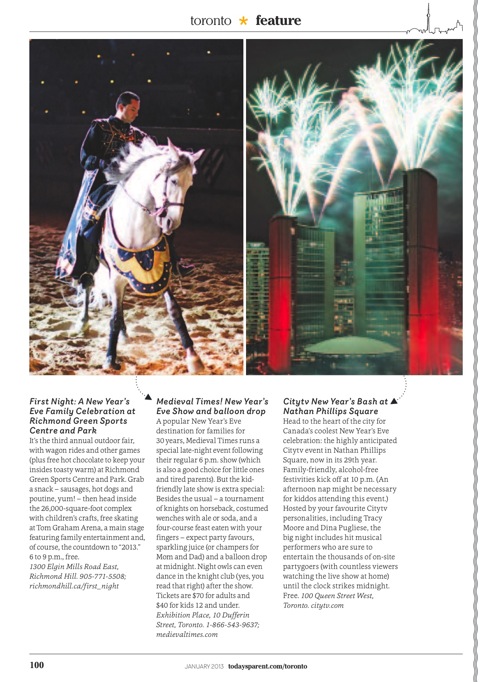 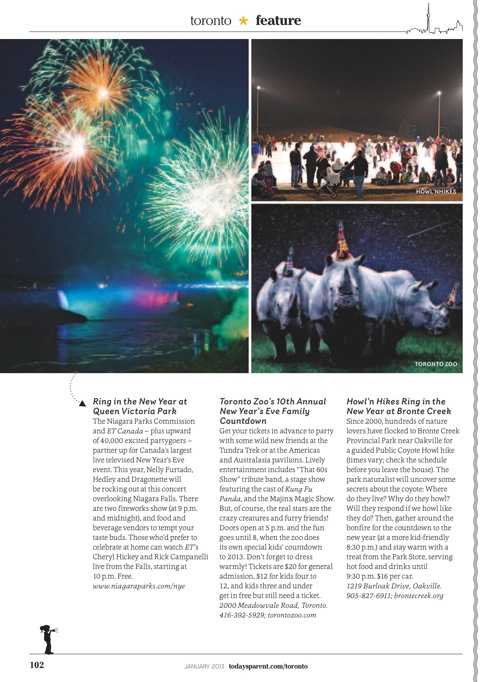