We have just the ticket this holiday season – a trip to the theatre to see a classic show or a new family favourite.

Cavalcade of Lights
November 17
For 45 fabulous years, the Cavalcade of Lights – complete with thousands of energy-efficient LED lights in red, white and silver, and a firework show to match – has marked the beginning of the holiday season in Toronto. Most of us know about the tree lighting, but there’s also a whole roster of musical performances to provide a soundtrack for the event: This year has pop sensation Victoria Duffield, R&B artist JRDN, and Jarvis Church of The Philosopher Kings. 7 p.m., free. Nathan Phillips Square, 100 Queen Street West. toronto.ca/special_events

A Christmas Carol, presented by Soulpepper Theatre
December 3-29
Bah humbug! We all know the story: Grumpy Ebenezer Scrooge is visited by three not-so-scary ghosts that teach him – and gift-hungry kids everywhere – the real meaning of Christmas. Michael Shamata’s production, starring Joseph Ziegler as the curmudgeon everyone loves to hate, is a family-friendly tradition at Soulpepper; besides a month’s worth of matinees, rush tickets for kids run as low as $5. Adult tickets, from $51 to $68, and student tickets for $32. Young Centre for the Performing Arts, 50 Tank House Lane, Building 49. 416-866-8666; soulpepper.ca.

Polar Express, presented by Orchestra Toronto
December 9
Canadian baritone Jeffrey Carl leads the audience through Chris Van Allsburg’s Polar Express, where a lucky boy takes a train to meet Santa for a special belief-affirming gift, accompanied by choristers from the Canadian Children’s Opera Company and performers from the Wonderful World of Circus entertain. Like the boy in the book, little classical music lovers won’t go home empty-handed: Kids who attend the show leave with loot bags full of take-home treats. Adult tickets are $39 and kids’ tickets are $14. Toronto Centre for the Arts, 5040 Yonge Street. 416-733-9388; tocentre.com.

The Snowman, presented by Toronto Symphony Orchestra
December 9
Mom and Dad’s fond memories of British Christmas classic The Snowman will have both parents and kids loving this show, which features a live symphony performance overtop the beloved family film. Intermission includes free art activities with the Avenue Road Arts School (a reward for sitting still during the first half of the performance!). Recommended for kids ages 5 to 12. Kids’ tickets from $17 to $33, and adults from $20 to $65. Roy Thompson Hall, 60 Simcoe Street. 416-593-7769; tso.ca.

Max & Ruby in the Nutcracker Suite
December 15
The beloved bunny siblings are psyched for Tchaikovsky’s classic ballet – until a winter storm has them stuck at home with Grandma! Luckily, she’s got some great stories: a Spanish bullfighter, the Sugar Plum Fairy and the Nutcracker Prince all imagined so vividly they come to life. Koba Entertainment’s musical is a perfect start for little theatre-goers-in-the-making who aren’t quite grown-up enough to sit through the classical ballet. Tickets from $23 to $46. Sony Centre For The Performing Arts, 1 Front Street East.1-855-872-SONY (7669); sonycentre.ca

A Chorus Christmas: Dancing Days, presented by Toronto Children’s Chorus
December 15
Three hundred young members of the Toronto Children’s Chorus – including kiddos as young as six – meet each holiday season to usher in the festive spirit. This year’s theme is “Dance Your Song,” featuring exciting performances by The True North Brass, plus John Rutter’s “Dancing Day” with Judy Loman on harp. Tickets from $35 to $45. Roy Thompson Hall, 60 Simcoe Street. 416-932-8666; torontochildrenschorus.com.

The Nutcracker, presented by Toronto International Ballet Theatre
December 22
For its fifth annual performance, artistic director Tatiana Stepanova’s The Nutcracker pirouettes into the Toronto Centre for the Arts for an intimate show aspiring ballet dancers won’t be able to resist. Based on Bolshoi Ballet’s Nutcracker, check out the city’s up-and-coming talent as mice and gingerbread men, and principal dancer Gabor Kapin as the Nutcracker-turned-handsome-prince. Tickets from $25 to $50. Toronto Centre for the Arts, 5040 Yonge Street. torontoballet.ca. 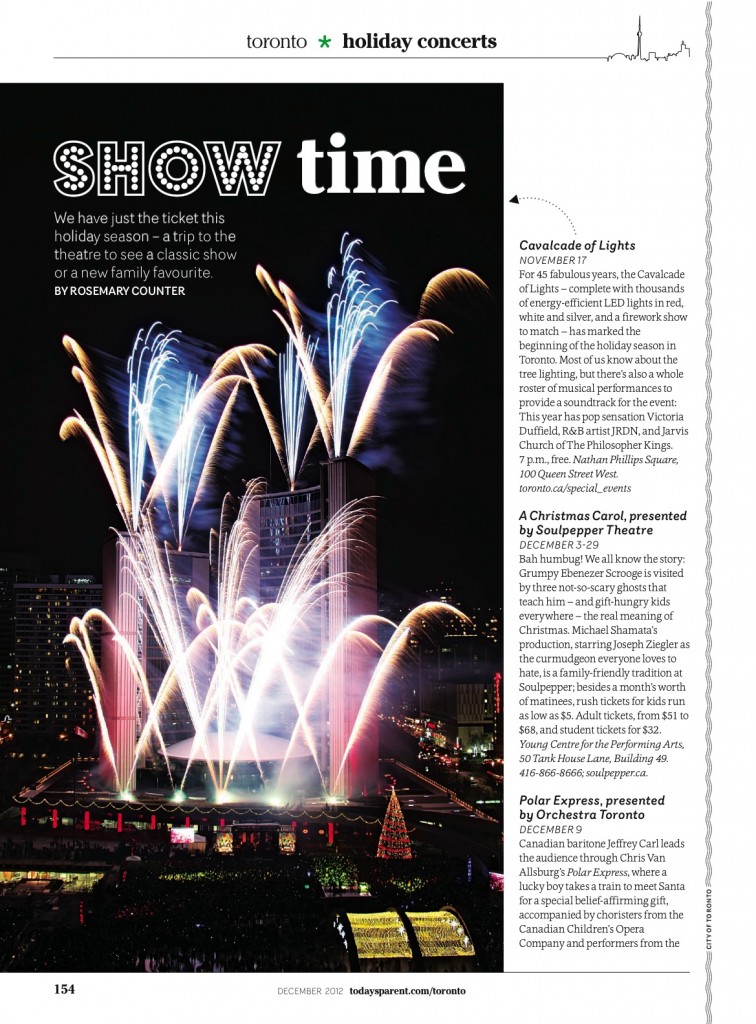 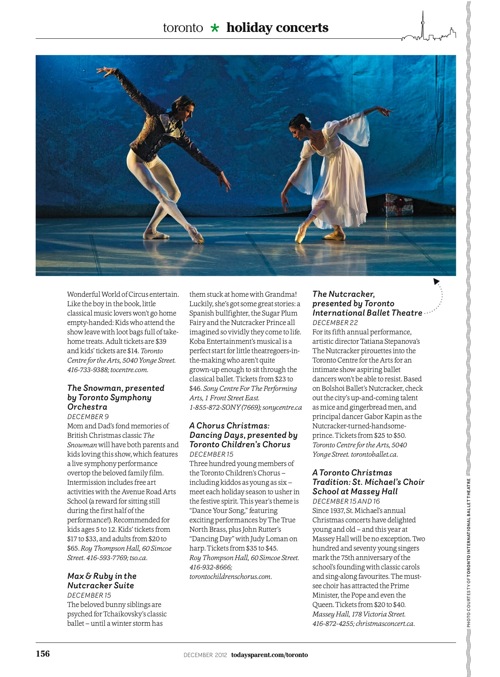