Reviews of Becoming Batman, On Tarzan and The Sopranos

Journey always says it best: Just a city boy, born and raised in south Detroit. He took the midnight train goin’ anywhere. Only the top-selling iTunes track of all time, Steve Perry’s power ballad has even the hardest of rockers tearing up at the belief in possibilities.

And speaking of possibilities, “Who hasn’t wanted to become a superhero?” professor E. Paul Zehr asks in Becoming Batman. Truthfully, Paul, I’ve never really thought about it. But I realize that for a large percentage of the (male) population, this is a pressing and valid concern. There’s just something about superheroes that men can’t stop believing.

“It’s my goal to use my extensive knowledge of science and martial arts to explore the scientific possibility of becoming Batman,” says the neuroscientist, kinesiologist and – get ready for this – black belt martial artist. Merging all kinds of nerd-doms, Zehr has written the newest escapist fantasy for freaks and geeks everywhere.

Starting with regular guy Bruce Wayne (or even with you), Zehr calculates body mass indexes and body shape (bigger than Lance Armstrong but not as big as a certain California governor). Compared with the clever invention of Bob Wayne, Bruce’s lazier, beer-drinking, office-dwelling twin, we learn genetic predisposition versus exercise performance and the effects of crime-fighting on the mind and body.

Sound hard? It is. Like Magic School Bus’s Ms. Frizzle before him, Zehr uses balloons and bathtubs to make science fun in the manner of Grade 9 biology. But, like Grade 9 biology, it’s all too easy for your eyes to glaze over between aerobic energy charts – even if they are about Batman’s fight with Killer Croc – only to wake up and find yourself lost.

But even to a science dropout who has never even read a comic (more emphasis on the movies would have helped my understanding), Becoming Batman has its charms. Like with your zany prof who spouts the joys of physics while failing to notice he has stepped in the garbage can, or in this case worn his costume to school, Zehr’s enthusiasm is infectious, albeit quirky – full of boo-worthy jokes (“Dorothy, we’re not in the Batcave anymore”) and serious points to ponder (“Is Batman a ninja?”).

If that last question actually enthralled you, Becoming Batman is your next step to supercool. If not, Zehr’s book makes a perfect gift that isn’t a tie for your boyfriend or brother. I have three (brothers, not boyfriends), for whom Batman is as real as the looming zombie apocalypse, with this science superhero hybrid in their birthday futures.

Not all superheroes are doing so well, however; poor Tarzan has seen more popular days. In On Tarzan, English professor Alex Vernon charts the rise and fall of the – stop me if you’ve heard this one – vine-swinging aristocratic orphan raised by apes. Surprise, surprise: Like the works of Conrad and Kipling, Burroughs’s original 1914 Tarzan of the Apes (and its, count ’em, 23 sequels) is all kinds of racist, sexist, imperialist, colonialist.

Vernon excels at historical context, weaving Tarzan’s countless reincarnations into everything from the Nazis to Vietnam. He links Tarzan’s literary birth, at the apex of the greatest immigrant influx in U.S. history, to the United States’ “fantasy of the selfmade man … the narcissistic orphan fantasy of early adolescence, maybe even of the perpetually adolescent America.”

So what is he? Vernon can’t make up his mind. And with a vast wealth of material from which to pick and choose –from the n-word-happy original series and follow-up comic book to the hyper-censored 1950s films and the Disney kidfriendly cartoon (you might say the movie never ends, it just goes on and on and on and on) – Vernon can explore it all without any definitive results.

My favourite chapter to giggle through by far is a homoerotic analysis called Monkey Business, hurling gems such as: “Male readers watch with Jane, admiring and maybe even desiring the muscles on that great big penis of a man.” Just imagine how Vernon feels about those bananas.

Some arguments are sexier than others, but Vernon proves one thing: Tarzan is what we make him. Each reincarnation is evidence of its time, but also of Tarzan’s timelessness for believers everywhere. The ability to invent – and reinvent – yourself is an alluring fantasy fit for kings of the jungle and boys at home.

Though you might not find him in a loincloth, wise guy Tony Soprano has murdered his way into boy-crushes everywhere. Hailed as the “greatest work of American popular culture of the last quarter century” by The New York Times, HBO’s second-favourite show has, like The Godfather and Goodfellas, a special place in the heart of male worship.

Film and TV scholar Dana Polan examines the mass appeal of this modern antihero in his creatively titled analysis, The Sopranos. Polan starts at the end with the now-infamous 2007 non-ending, where you-know-what blaring on a blank screen left millions of boys feeling as if they had been dumped on prom night.

How could anyone be so cruel? Polan has a few theories: Is it a tribute to modernist European art cinema? Or, more skeptically, a set-up for sure commercial success on the big screen? Or has irony struck again?

Polan picks the latter, citing new media’s metatextual interaction between writers, viewers and the Sopranos themselves. And, yes, there’s plenty of semiotic jargon that Tony Soprano would scoff at. (When Tony’s shrink, on Proust, says “that one bite unleashed a tide of memories of his childhood and ultimately his entire life,” Tony retorts, “That sounds very gay.”)

Between comparing The Sopranos with the good old days of Leave it to Beaver and turning his nose up at network TV, cable snob Polan somehow captures the show’s smug ’tude – and its undermining – through dramatic plot retellings. Needless to say, a warning to readers who plan to watch the show: Polan reveals every twist and turn with enough glee and vigour that you might think he had penned the scripts himself.

Which is maybe the point: Polan loves Tony Soprano, Vernon enjoys a man in leopard print and Zehr wants to be Batman when he grows up. We may never understand the undying belief that surrounds superhero lore, but you gotta tip your hat to their enthusiasm.

And who am I to judge? This small-town girl cried at America’s Next Top Model. 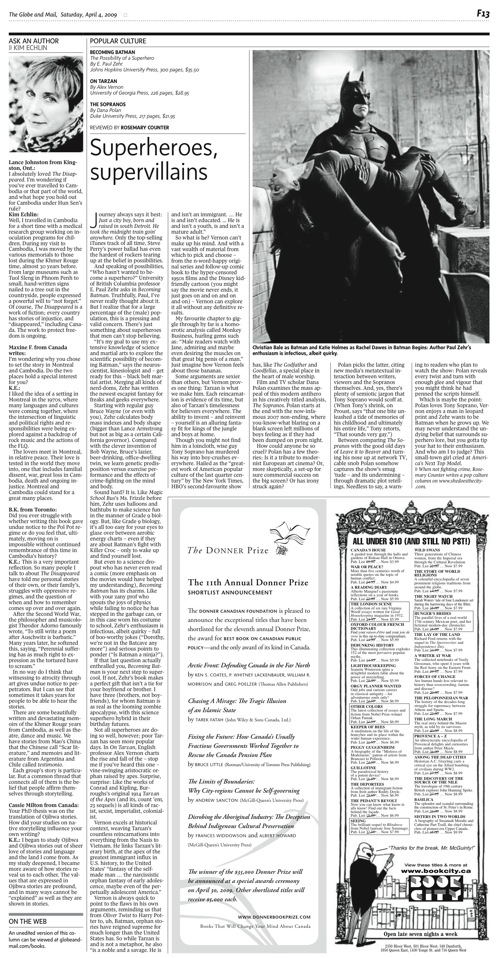