The brands that rock the cradle

For anxious parents, a ‘digital parenting’ revolution is fast approaching

When his five-month-old needs some middle-of-the-night attention, Mark Buchner doesn’t fumble around like a zombie, as most new parents do. Instead, he calls out to Alexa, Amazon’s voice assistant, using an Echo Dot device. The 38-year-old Toronto designer has synced his light bulbs, as well as his Spotify account with preloaded baby tunes, to lull his son to sleep. A Nest video camera watches soundly all night, and if and when the baby stirs, Buchner receives an alert on his Apple watch, and then quickly checks in on his phone. “I love the ability to control my house from wherever I am,” he says. “When my hands are full, it feels like a lifesaver.”

Buchner also has a technologically co-operative wife, which my poor husband does not. Ground zero of a mounting battle at my house was, of all things, the baby monitor. On one side, a gadget enthusiast, satisfied with only the highest-tech, infrared night-visioned, LED high-res-screened, temperature-measuring, WiFi-connected, synched-to-your-smartphone monstrosity promising “peace of mind” from “a watchful eye.” For my husband, like Buchner, more and better technology can only make these new months easier.

As for me, a suspicious and techphobic Luddite who’d prefer a sleepy emoticon text message, and only as absolutely necessary, I’d rather skip Big Brother altogether. I worry that a house full of gadgets will cause more harm than good, and I have enough stress right now without worrying that my monitor’s been hacked to stream midnight feeds to perverts online. And since we’re all squeezed into the same 1,000 square feet, including a glass-solarium-turned-makeshift-nursery, we mostly see and always hear each other already.

And yet for a whole new generation of parents, one’s own eyes just aren’t enough. They can’t spot a fever, count heartbeats per minute or ensure her oxygen level is sufficient. You’ll be clueless about his respiration patterns, body positions or heart palpitations. But anxious parents need not worry, say the brains behind a slew of cutting-edge products enabling the so-called “digital parenting” revolution – technology can help you track and hack your baby.

Last year, Google filed a patent for a smart crib. Details are scarce so far, but rumour has the Nest-designed prototype cram-packed with sensors – motion, pressure, movement – which sync to an app and update to your smartphone. Among would-be features: a camera that detects coughing and sneezing, an air sensor that notifies you of the stench of dirty diapers or vomit and a built-in microphone that listens for your child’s crying. (Because there’s nothing more helpful during a meltdown than an app alert reminding you said meltdown’s in progress. My husband thinks it’s awesome.)

But desperate times call for desperate measures, and since nobody’s more desperate than tired new parents, the race to build a smart crib is on. For the sad souls driving their newborns in circles at 4 a.m., French auto manufacturer Renault is hard at work for the 2018 launch of the Dream Cradle, a self-rocking crib where parents can adjust slope, direction and intensity (by app, naturally). Similarly, Ford Spain’s prototype is the Max Motor Dreams, a crib that replicates the gentle motion and soft whir of a car – driving your favourite route uploaded via app that replicates exact speeds and streetlights.

Currently dominating the smart-crib market is celebrity sleep guru and pediatrician Harvey Karp’s creation SNOO, self-proclaimed to be the “safest and most effective baby bed ever made.” Just five years ago in his book The Happiest Baby Guide to Great Sleep, Karp was “thrilled to offer these simple – but surprising – steps to help your infant sleep beautifully.” Today, the $1,160 (U.S.) SNOO senses a baby’s agitation level and rocks, wiggles and soothes (with rain or womb white noise) accordingly. “Welcome to the 21st century of parenting,” its promo video says.

All this, meanwhile, as the Canadian Paediatric Society advises we’ve got far too much tech as it is. Babies under 2 should consume no screen time, they say, but good luck enforcing the guidelines with your own smartphone always in hand. “Modelling is especially important at that age because small children, especially before they learn to talk, take their cues from the other people in their lives,” says Matthew Johnson, director of education at MediaSmarts. Too much tech use by parents could even cause problems down the road; a 2017 study from the University of Michigan reported that interruptions to parent-child time by digital tech were associated with behavioural problems such as temper tantrums, hyperactivity and whining.

For new parents though, solving tonight’s problem might trump all of the above. But experts are split on if and when tech can solve your parenting woes. “In my opinion, anything that makes a parent feel more comfortable is great,” says sleep consultant Helen Sands, director of Hushababy. That said, she offers a gentle reminder that technology can quickly become a crutch: “At some point, your baby will grow out of the crib, and transitioning comes with many unforeseen problems.” Not to mention the more immediate problem of never going anywhere. “Many times in your baby’s life, he’ll have to sleep places other than home. If you’re unable to transport the crib everywhere you go, that’s a problem.”

A maybe-solution to the above? Skip the crib entirely and stick a sensor right on the source (that is, the baby). The $336 (Canadian) Angelcare Movement Monitor, for example, uses a motion-sensor pad tucked beneath the crib mattress that sounds an alert if your baby is still for 20 seconds. The Mimo onesie, $200 (U.S.), is fitted with two breathing sensors and a movement sensor that track respiration, tem- perature, body position and sleep activity. And the Owlet Smart Sock, $299, is a wearable tracker on the baby’s foot that wakes you up should her heart or oxygen rate drop. All make similar claims: “Know your baby is okay,” Owlet’s tagline reads. “Reduce the inevitable stresses of infant care,” Angelcare says. Nearly every one of these new gadgets promises the ever-elusive “peace of mind.”

Only, whatever the product or price tag, peace of mind is not for sale. “Every new parent remembers waking up 20 times a night to check that their baby is breathing,” child and family therapist Jennifer Kolari says. “Makers of these products are capitalizing on that anxiety.” Checking that monitor screen one more time may offer what she calls “a hit of relief,” but like most hits, it won’t last long and will return stronger than before. “The more you rely on a device, the more anxiety you’ll have,” she says. “Parenting is a love and fear you’ve never known and you need to learn to juggle.”

Which is why, in the spirit of modernity and compromise, I reluctantly agreed to a monitor – provided it’s got minimal buttons and doesn’t connect to WiFi. The night vision’s only moderately creepy, and I must admit, it’s sometimes a very convenient hit of calm just when I need it most. Other times, I still creep in to hear breathing with my own ears – just like the good old parenting days of yore. 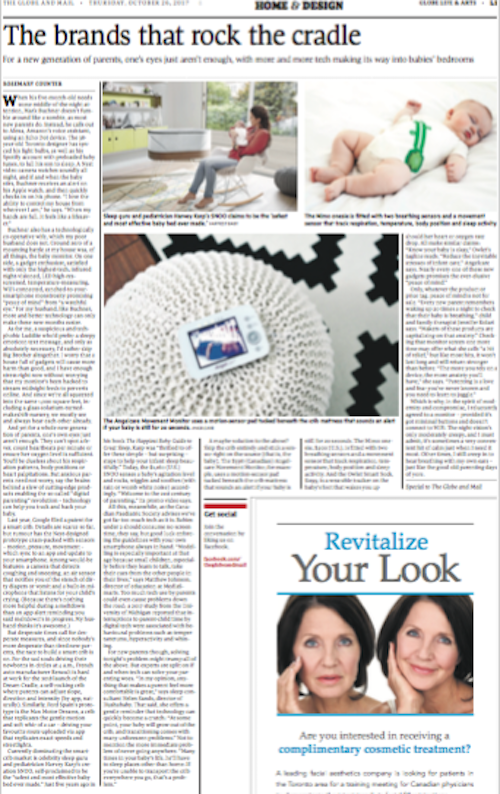