Choosing a moniker for your newbie can be daunting. Here’s how to pick the perfect one for your babe.

Danah Duke wasn’t one of those moms with a baby name picked out years in advance. So when the Calgary mom-to-be was faced with naming her first child, the pressure was on. “I remember at one point thinking, ‘Oh my gosh, she’s going to have that name for the rest of her life.’”

Since her name is mispronounced daily (it’s Dah-na, not. Day-na) and her last name is prone to nicknames (a couple of friends call her Daisy—get it?), Duke wanted something simple but unique, cutesy-nickname-free and meaningful. By chance, Duke, a wildlife biologist who used to track wolves, came across Tala. “It’s actually a native word for ‘stalking wolf,’” explains Duke, a tidbit her now four-year-old revels in telling anyone who’ll listen.

Duke claims she wasn’t influenced by trends, but many of us are. In fact, Duke’s daughter’s name is part of the biggest—and most ironic—baby name fad since the 1960s: originality. These days the rush to be distinctive is fierce, says BabyNameWizard.com’s expert, Laura Wattenberg. “Parents are trying harder and harder to differentiate themselves from one another.”

As such, even the most popular names—topping the last decade’s lists were Emma and Jacob—are a fraction of what they were. They’re being slowly replaced with creative alternatives: new spellings (Abbigayle), locations (Brooklyn), letter order (Nevaeh—heaven backwards), dividing (Alex and Zander for twins) and even blending (Twilight’s Renesmee, a mash of Renee and Esme). If all of these sound wacky, you might instead choose a traditional name. But even these are trendy—Ava and Olivia, for example, are 100 times more popular than ever and sit firmly in the top 10. Jessica and Tiffany, popular throughout the ’80s, are now too close for comfort; Gertrude and Edna, however, have yet to make a comeback. But, like shoulder pads, never say never.

“Names are like fashion—what goes around comes around,” says Carla MacKay, author of Canadian Baby Names (Lone Pine). Even the stuffiest name, she says, can be resurrected in an instant by pop culture. For example, actress Michelle Williams and the late actor Heath Ledger named their daughter Matilda and the name immediately spiked in popularity. But parents are by no means passive culture sponges; they’re quick to sense trends and jump off the bandwagon in search of something new. For Duke, a second baby called for a more traditional name—still meaningful and unique, but this time it had to roll smoothly off the tongue with Tala.

Though it hadn’t even come up during her first name search, Maisie was the clear winner for round two. Duke liked its old-fashioned feel and the double M with her middle name, Micah. When she sent out the birth announcement, Duke spelled her youngest daughter’s name with a Y. After she mailed it, however, Duke decided the name didn’t look right. “I don’t know why I changed it,” she admits, but she’s glad she did. As is Toronto mom Barbara Sommerville, who initially named her youngest Joshua. A few hours after his birth, though, she informed family and friends she and her husband had changed it to Matthew. “He just didn’t look like a Joshua to me.”

Both Sommerville and Duke followed the best expert naming advice there is, and it has nothing to do with trends: Go with your gut. And are the moms thrilled with their name choices? Of course. Like for most parents, it can be a hard decision, but as soon as you pick a name, you may never be able to imagine your child as anything else. Or, as Duke puts it: “Tala is such a Tala, and Maisie is such a Maisie.” 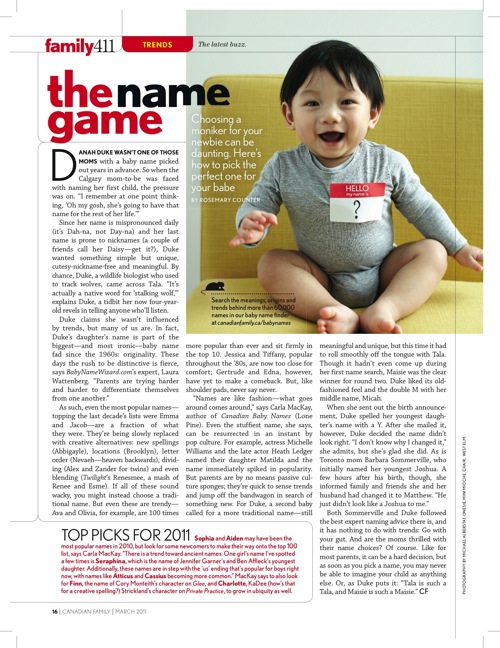