The straw that stirred the feminist drink

Review: A Strange Stirring: The Feminine Mystique and American Women at the Dawn of the 1960s

By the time I landed in women’s studies, almost a decade ago, it wasn’t just about feminism. In fact, it wasn’t even just about women.

New feminism – you might call it third-wave, or you might not – includes (but isn’t limited to) anti-racism, the rights of the differently abled, colonialism, post-colonialism, the International Money Fund, the World Bank, heterocentrism, the penetrating male gaze, intersecting oppressions, discriminatory immigration laws and the abuse of foreign domestic workers.

The plight of the white woman, however, didn’t make the syllabus.

These days, the struggles of the (white, middle-class) women who once dominated feminism’s second wave – Simone de Beauvoir, Kate Millett, Germaine Greer – were, at least in my classroom, nearly chastised for their privilege. And the worst of the worst was Betty Friedan, whose 1963 The Feminine Mystique became the bible of bored housewives suffering mostly from free time and unfulfillment. Too many party dresses and apple pies can do that to a girl.

But all jokes aside, there was a time not too long ago when Friedan’s claims – women aren’t happiest in the home; women seek meaning in their lives – were both revolutionary and dangerous. If the controversy eludes you, recall that The Feminine Mystique still ranks atop some impressive lists: 37th on New York magazine’s list of the century’s best works of journalism; and, by one right-wing magazine’s count, seventh on the list of most harmful books ever written – just above Mein Kampf.

New interest in the era – Mad Men, anyone? – is good news for Stephanie Coontz. Her book, A Strange Stirring: The Feminine Mystique and American Women at the Dawn of the 1960s, tries desperately to make sense of the time and people who adopted The Feminist Mystique as their personal manifesto and turned it (and its author) into a literary sensation. “I write a biography not of Betty Friedan the author, but of the book she wrote,” Coontz says.

This turns out to be a bummer, however, as Friedan is much more interesting than she’d have her followers believe. Besides her crumbling marriage (about which I’m very curious and nosy), she presented herself as just another disgruntled homemaker. But relatability – she’s just like us! – is mostly a marketing ploy, Coontz implies. Behind the lace curtains, Friedan was a Smith grad and political activist turned freelance writer (this is a job, Mom) who was long penning lady-mag pieces like Women Fight for a Better Life! (1953) and Women are People Too (1960) for Ladies’ Home Journal. The latter, which garnered mostly criticism from outraged readers, evolved into The Feminine Mystique, its hype ensuring bestseller status before it even hit shelves.

Timing here is everything. Coontz spends much time reliving the swinging sixties, shocking us with ridiculous laws and depressing statistics. Through this jumble of facts and figures, she captures the contradiction and hypocrisy of the era: a postwar, post-Depression time when the nuclear family reigned supreme as divorce rates soared; a time of violent civil-rights resistance while June Cleaver dominated the television set; a time when the other blockbuster bestseller is Helen Gurley Brown’s Sex and the Single Girl; a time when “the only good thing you could do as a women was be a housewife, but you would never get any respect that way.”

These are the woman Friedan – and now Coontz – champions, those trapped between the enforced ideals and disappointing reality of housewifery. The Feminine Mystique spoke to this admittedly elite slice of comparatively lucky ladies: “Like light bulbs going off again and again,” “Now I know I’m not alone” and, “I realized what I thought might be wrong with me, was in fact, right with me.” Coontz weaves glowing reviews – making this book a review of reviews (and this a review of a review of reviews) from historians, sociologists, her mom, feminists, a lone man and even some sympathetic working-class women.

Because, in retrospect, it can be hard to empathize with Betty Draper when you know Rosa Parks is still standing on the bus. It may be difficult – impossible even – to understand “housewife syndrome” now that quitting your day job is the post-feminist dream. But ultimately, Coontz concludes, “it is pointless to argue over who’s got more pain.”

New feminism may strongly disagree, but the fact that we’re still fighting about it remains a good sign. 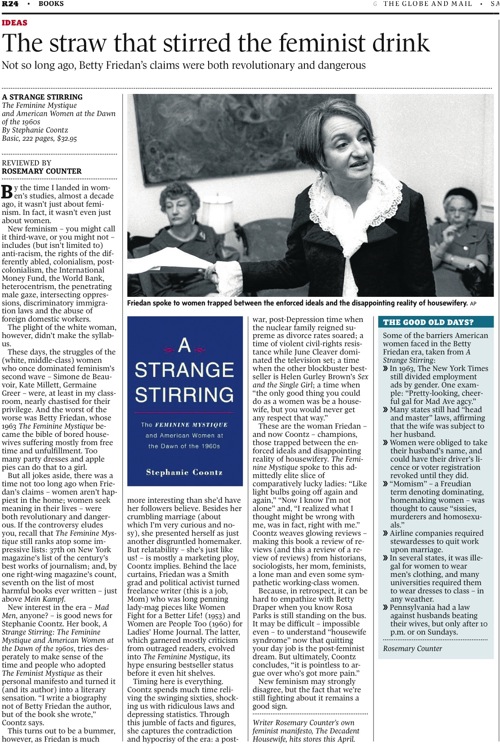