This week, Ottawa lawyer Prasanna Ranganathan has a blind date with two women. Luckily, they have a lot in common. “We’re all huge Oprah fans, so we developed a friendship over Twitter and email,” he says. The Oprah Winfrey Network (OWN) Ambassadors—“our unofficial moniker,” he laughs—plan to meet for brunch before heading to the Metro Toronto Convention Centre on April 16, where talk-show queen Oprah Winfrey is filming her first-ever Canadian broadcast.

“As soon as they announced it, I was on the phone in 20 minutes,” says 31-year-old Ranganathan. Tickets sold out within 24 hours (a second show added later also sold out). Like his two friends, Ranganathan got lucky the first time around, skipping the cheap seats ($49) and securing the coveted “emerald seating” ($395) at Oprah’s feet. The same ticket is now being offered for $1,550 on Kijiji,but Ranganathan won’t be selling his spot. “I feel like Dorothy from Oz headed to the Emerald City,” he says.

Joining the pilgrimage is Liz Toole, a 47-year-old real estate advertiser from Truro, N.S. Toole has watched The Oprah Winfrey Show religiously for 23 years, has seen the show taped twice in Chicago, subscribes to the very successful O Magazine and has read every book club selection. She was even chosen to tour Australia as one of 300 “ultimate viewers” in 2010, but doesn’t consider herself lucky. “I don’t use the word luck,” she says. “Like Oprah, I believe that things are meant to happen.”

One thing meant to happen, according to most every Oprah fan, was the sure success of the Oprah Winfrey Network, better known as OWN. Ratings indicate otherwise: since its January 2011 launch, the cable channel specializing in inspirational programming has failed to live up to expectations. A March report from research firm SNL Kagan estimates OWN has an operating loss of $142.9 million, largely due to “programming costs for shows that are not working, as well as severance costs for those being laid off.”

Last month saw the cancellation of Rosie O’Donnell’s The Rosie Show. After five months on the air, O’Donnell’s ratings averaged less than 200,000 viewers an episode—for comparison, Oprah’s interview with Whitney Houston’s daughter drew 3.5 million viewers. The network laid off 20 per cent of its total staff in the process, and paid $15 million to break O’Donnell’s two-year contract.

But this is all meaningless to Oprah fans, who believe in the OWN network just the same. “It’s going to do well. It’s already doing well,” says Nada Mojsilovich, a 40-year-old mother and teacher from Toronto, who’s another ultimate viewer. If anything, to fans like Mojsilovich, Oprah’s struggles only make her more endearing: “You’ve got to give her credit for trying [a network], and for being so open about how difficult it is.”

In a rare interview off an OWN stage, with best friend Gayle King no less, Oprah appeared on CBS This Morning on April 2. “If I knew then what I know now, I would have made some different choices,” Winfrey admitted. Keen viewers knew this as a variation of Maya Angelou’s adage—“When you know better, you do better”—often cited by the television host. For “Opraholics,” it was exactly what they wanted and just what OWN is missing: more Oprah.

Though her original contract had Winfrey on air a minimum of 35 hours per year, that number has since doubled. Amidst lesser known shows like Unfaithful: Stories of Betrayal and Vancouver’s The Shopping Bags, Oprah is appearing more and more on the ever-changing OWN schedule: Oprah: The Farewell Season takes a backstage look at her old show; Oprah’s Next Chapter has her interviewing superstars like Lady Gaga and Steven Tyler; and Oprah’s Master Class teaching life lessons from “masters,” including Jane Fonda, Morgan Freeman and Jay-Z.

For those wanting to mainline pure Oprah, however, there’s Oprah’s Lifeclass, an hour-long TV show featuring Winfrey alone on her trademark couch reflecting on her life and show with lessons she’s learned: how weight affected her relationship with boyfriend Stedman Graham; her “aha! moment” of forgiveness; how love doesn’t hurt. Meanwhile, introspective questions flash across the screen. Where is your ego getting in the way? What is holding you back right now? What do you feel you’re meant to do with your life?

During season one’s ﬁve-week run last October, 4.1 million viewers flocked to Oprah.com with their comments and confessions. Here, Lifeclass also gives homework, asks the weekly question, and saves your notes in a virtual journal. And the logical next step in a truly interactive viewer experience? True interaction—and so began the live tour.

Coming from St. Louis and New York City, Lifeclass: The Tour, a two-hour live Lifeclass event featuring a roundabout of experts like Tony Robbins and Deepak Chopra, makes its third and final stop in Toronto. “I’m sure we’ve been on the radar for some time, but I like to think my video did it,” says Mojsilovich. In 2007, after writing Oprah to ask her to come to Toronto, Mojsilovich was asked by Harpo Productions to make a video. She went to the red carpet during the Toronto International Film Festival; Woody Harrelson, Angelina Jolie and Josh Brolin all vouched for a visit.

With Toole, who she met on the Australian “ultimate viewer” trip, Mojsilovich began Canada’s OWN Viewers, the unofficial Canadian Oprah fan club. Ranganathan, a rare male member, blogs for the site. And while they’re not on Oprah’s payroll, explains Mojsilovich, “Harpo is very aware of what we’re doing and very supportive.” There are perks: she receives personal tweets from Oprah, who tipped her off to the Canadian visit months ago. “She said she was looking forward to seeing me,” she says, thrilled.

Many Canadians are looking forward to seeing Oprah, too. As groupies move into the city for Monday’s big day, Tourism Toronto is offering a special Oprah weekend package at 50 participating hotels, including the Ritz-Carlton and the Fairmont Royal York. The packages, like the shows themselves, sold out immediately: $437, to start, bought a one-night stay and two tickets, plus 15 per cent off at the Bay, where women will be perfecting their Oprah outfits.

“If you want to get on TV, wear something bright and cheery,” advises Toole. Also get there early (especially if, like the ambassadors, you plan on sitting together), bring a pen and paper, and then go with the energy in the room. “If you’re gonna cry, let it go. Feel it,” she says, recalling the screaming Hilary Duff concert she brought her daughter to, and how that “won’t even compare to the grown women screaming over Oprah Winfrey.” But the goal isn’t entertainment, they all say, it’s inspiration to ﬁnd your spirit and use it in service of the community.

“Lifeclass says to look at your life critically, determine what brings your bliss, and make that calling your life’s work,” says Ranganathan, who recently left his job as a human rights lawyer. “Law just wasn’t my passion; I believe my calling is in entertainment media.”

While cynics may roll their eyes, believers like Ranganathan are nonetheless journeying from far and wide for life lessons from the Wizard of O. Whether Canadians will embrace her as great and powerful, or just as an ordinary person pulling big strings, remains to be seen. 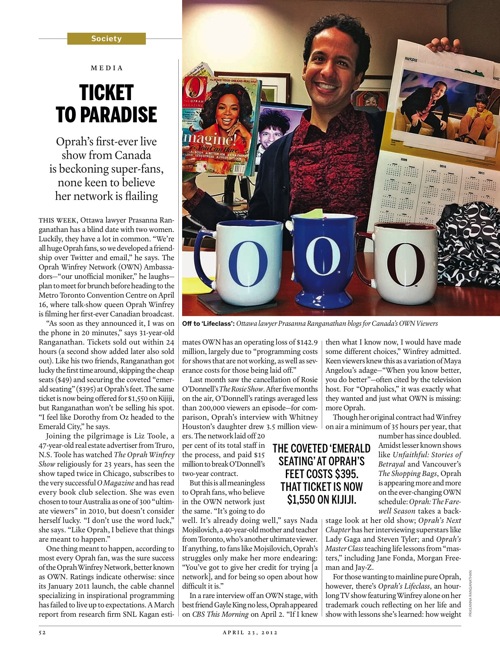 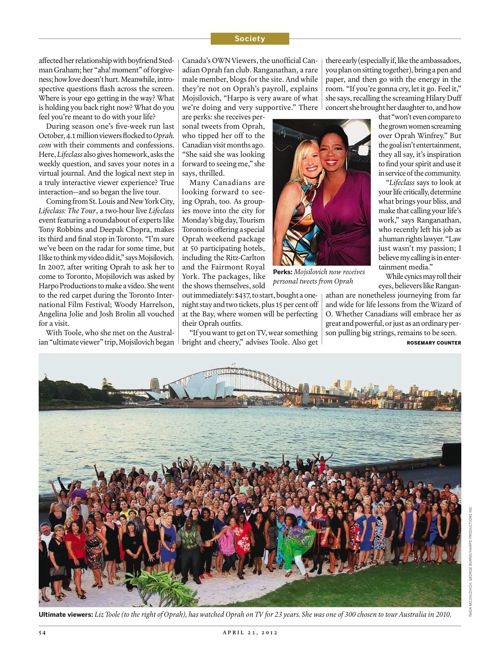