The Washington Post‘s On Parenting

Somewhere in the middle of my second trimester, my body changed seemingly overnight from maybe-pregnant to obvious, undeniable baby-on-board. At the same moment, my bump moved from its cushy bubble of is-she-or-isn’t-she polite discretion to a free-for-all open season of body commentary.

It started on vacation at week 20, a cool and booze-less Babymoon lest we never ever travel again, where, since I could hardly hide beneath big sweaters in my swimsuit, I debuted my bump in style on a pink Bermudian beach. (If you’d like complete strangers to comment daily on your bigness through a rummy slur, I recommend this tactic.)

“Are you sure there’s only one in there?” joked a waiter. I blamed the buffet and laughed it off, then obsessed over it the rest of the trip. I skipped dessert every night as if it made any difference at all.

Apparently I had “popped” while away.

“Wow, look at you!” said my doorman upon my return. He’d watched me come and go, each day for months and months, but only today noticed I might fall to the floor and give birth in the lobby. “Looks like someone’s about to pop!”

Well-meaning, I know. But somewhere in the middle of month four, flattering it is not. I thanked him sheepishly while forming my official complaint to the condo committee. (I didn’t send it, saving any disciplinary actions and my dignity in one fell swoop.)

For the record, I was not ravenously eating for two. I had not gained 50 pounds in four months and all of it distinctly in my uterus. I know this because I weighed myself, paranoid now I was expanding exponentially, and was actually a few pounds below my target gain. The pregnancy websites and charts and apps I read daily actually suggested I take down an extra burger or two, as did anyone I know who had grown and birthed a baby in this lifetime.

That’s when the discrepancy became clear.

Women, dear God bless them, never once mentioned my hugeness, the waddle in my walk, or whether my feet were comfortable squashed into my shoes like that (a direct quote from my husband, who since knows better). To women in general and mothers in particular, I was cute as a button, looking three months rather than five and, best of all, the gloriously vague “glowing.” Thank you, women.

No thanks to this guy from the elevator: “Just a few more weeks, I see!” he said with complete confidence. “I’m a physician.”

“Fourteen more, actually, so you’re not even close,” I snapped back at him as the elevator doors closed, adding a cruel review of his medical savvy because it felt only fair. I like to think he felt so badly that he recounted the story to his wife, who called him a jerk on my behalf, which in turn made him feel even worse.

When I told this humiliating tale to my girlfriend, a new mom who’d survived similar uninvited commentary and come out swinging, she was infuriated. In an F-bomb-littered all-caps e-rage, complete with headless photo of my six-and-something bump attached, she asked, “What do people think 9 months even looks like?”

Which is how I became the guest star of the most enlightening parenting conversation I’d ever been involved with. Dozens upon dozens of women — after telling that doctor where to go, mind you — began posting photos of their actually about-to-pop bellies. One of them stands in a doorway, stretching edge to edge. “Day before delivery,” she wrote proudly. “Oh god, I can’t believe I’m posting this,” says another. And my personal fave: “Getting induced right now!”

Their bodies, though I hate to sound even semi-similar to those whose opinions started this madness, are huge. Gorgeous and womanly and each one’s uniquely a miracle, and seriously huge. So large, in fact, that I started to wonder if I had ever really seen a 9-months-pregnant person in this lifetime.

I see baby bumps, of course. They are everywhere — accessorized like purses and marched along red carpets. Beyoncé and Lauren Conrad and Amanda Seyfried make it look great and easy — but these are celebrity bodies, first of all, and even still, they could all disappear into fabulous seclusion anytime. I usually last see a real-life bump at a baby shower, two months before go-time, squeezed into pregnancy Spanx and beneath a flattering maternity frock.

So, in an effort to fill in the gap, we often look to television. We tell ourselves that, as a society, we’ve come so far since Lucille Ball was told by the networks not to utter the P-word. Everything’s different now, apparently, but in practice not so much.

Recall (overdue) Rachel on “Friends” looking a slim 6 months, tops, compared to castmate Lisa Kudrow, whose real-life pregnancy was presented on prime time as triplets. This year on “The Big Bang Theory,” producers deliberately portrayed a pregnant Bernadette with realism in mind — both size-wise and gestation duration. The result was almost too real; rumors circulated that actress Melissa Rauch must be hiding a real-life pregnancy.

We’ll never see the newborn’s face — like Howard’s mom, the “Big Bang” audience hears the baby’s screams but she never appears onscreen — but here’s usually where Hollywood hands a new mother her just-born baby, played by a clean and well-formed 3-month-old stunt baby. Like “Ready to Pop,” “Just Popped” and anything too close to the messy business of birth gets effectively erased from view and clouded in confusion. Remember when just hours after delivery, Kate Middleton waved happily to the crowd, many of whom earnestly wondered, “But why does she still look pregnant?”

I cannot begin to worry or care about those comments just yet, and with large societal shifts unlikely within this, finally, my last trimester, here are just a few thoughts on some things well-meaning people should not say to pregnant women: First, do not speculate on the due date; you are almost certainly wrong and also it is none of your business. Under no circumstances use the words big, huge, ginormous or “about to pop!” Do not tell her she looks tired and suggest sleep. Definitely do not remind her that pregnancy is “the easy part.”

So what should you say? It’s almost too easy: “You look great” or “you’re glowing” brightens anyone’s day. If they really look awful, do consider “You look so happy!” instead. You can’t go wrong with old faithful “congratulations.” And if all this is still unmanageable, a kind smile works just fine. Then zip it. 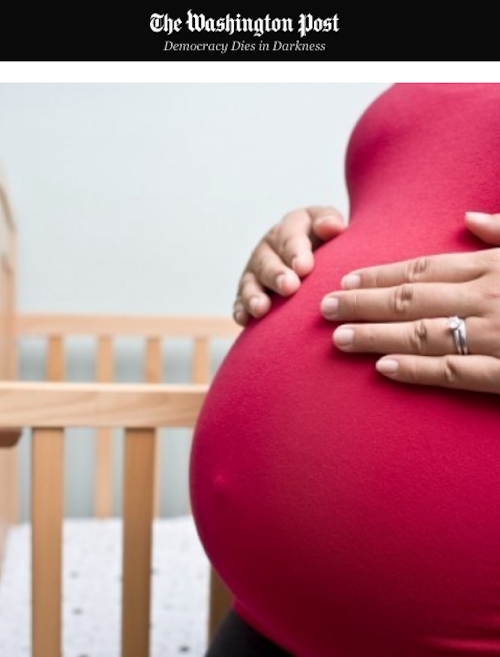